This week I received a book by Cardinal Albert Vanhoye, Old Testament Priests and the New Priest: According to the New Testament.  It is an English translation of a work that originally appeared in French in 1980.  The book has three movements.  Part one focuses on the Old Testament priests.  Part two discusses the new priest, Jesus Christ.  Part three then talks about a priestly people. 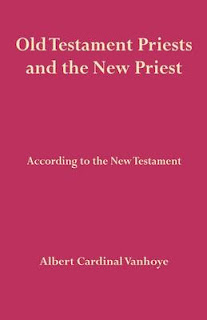 I noticed on Amazon that a new book by Vanhoye has just come out:  A Different Priest: The Epistle to the Hebrews. 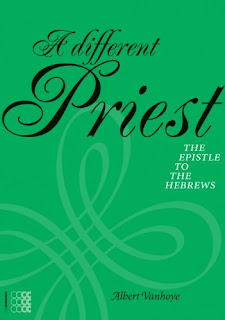 Description:
"The first part, which only examines one theme, the Name of Christ, offers a general and contemporary Christology. The next two parts offer a priestly Christology, firstly more general and then more specific. Finally, the last two parts show the result of this for the Christian life, lived out in faith, hope and charity. The author of this work has worked for many years on the Epistle to the Hebrews, and, notably, has taught it at the Biblical Institute and published a great number of specialist articles and books on it, and now brings one of the most contemporary authoritative commentaries to a wider audience, contributing with the understanding of the unique Priesthood of Jesus Christ for the first Christian communities. In this work, a detailed analysis of the text known as the Epistle to the Hebrews enables us to conclude without a shadow of a doubt that this is the full text of a splendid Christian preaching, which constantly conforms to the rules of Semitic rhetoric, including various genres of parallelism, synonymis, antithesis and complementarity, and obeying a concentrically symmetrical schema."

Vanhoye is one of the most prolific authors on Hebrews.  He is best known for a landmark work on the structure of Hebrews, a work that is still influential today.  His works have appeared in several different languages.
Posted by Brian Small at 10:04 PM 2 comments: