Deciphering the Worlds of Hebrews

I have just been alerted to the publication of this book, which apparently is a collection of Gelardini's essays: 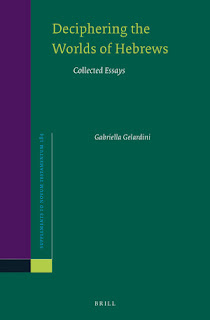 "In the collection entitled Deciphering the Worlds of Hebrews Gabriella Gelardini gathers fifteen essays written in the last fifteen years, twelve of which are in English and three in German. Arranged in three parts (the world of, behind, and in front of Hebrews’s text), her articles deal with such topics as structure and intertext, sin and faith, atonement and cult, as well as space and resistance.

She reads Hebrews no longer as the enigmatic and homeless outsider within the New Testament corpus, as the “Melchizedekian being without genealogy”; rather, she reads Hebrews as one whose origin has finally been rediscovered, namely in Second Temple Judaism."

J. Michael McKay, Jr. reviews Madison N. Pierce, Divine Discourse in the Epistle to the Hebrews: The Recontextualization of Spoken Quotations of Scripture. 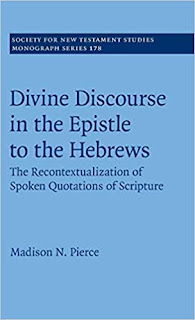 Abstract:
"The Letter to the Hebrews is generally regarded as the most sacrificial text in the New Testament. This article argues that Hebrews, read within the wider context of sacrificial discourse in the ancient Mediterranean world, not only represents a textual moment in the rhetorical dissociation of the early Jesus movement from the sacrificial cult in Jerusalem but also reflects the rhetorical obfuscation of Jesus’s sacrificial self-offering as it was being replaced by an emphasis on the interpretation of Jesus’s death as sacrifice, with the result being the inevitable sacrifice of the former for the latter in early Christian discourse."
Posted by Brian Small at 6:18 PM No comments: