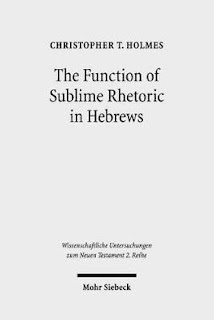 Description:
"In this study, Christopher T. Holmes provides a focused analysis of the rhetorical and stylistic features of Hebrews 12:18–29, their intended effects upon the audience, and the role of the passage in the larger argument of Hebrews. He draws extensively from the first-century treatise, De Sublimitate, arguing that it provides a significant context for interpreting the rhetoric and style of Hebrews. Although New Testament scholars have drawn significantly from the ancient handbooks of Aristotle, Quintilian, and Cicero in the last several decades, this is the first monograph-length study to use De Sublimitate as the primary analytical tool for New Testament interpretation. The result of the study shows that the author's efforts to move the readers »beyond persuasion« shed new light on the thought and genre of Hebrews. Christopher T. Holmes offers both exegetical insights about Hebrews and an additional way to think about the distinctiveness of early Christian rhetoric."

Two new articles in the Journal for the Study of the New Testament:

"A growing number of scholars have argued that Christ’s offering in Hebrews is not limited to the cross but extends into heaven; in recent work David Moffitt contends that Christ’s heavenly, atoning offering is perpetual and coextensive with his intercession. This article calls this further step into question, by examining the function of Christ’s heavenly session in Hebrews’ construal of sacrificial process, and by exploring the nature of his heavenly intercession and its relation to his offering and enthronement. It argues that Christ’s session is a hinge, marking an emphatic close to his sacrificial work for the forgiveness of sins, and inaugurating his royal reign and priestly prayer."

Moffitt, David M. “Jesus as Interceding High Priest and Sacrifice in Hebrews: A Response to Nicholas Moore.” Journal for the Study of the New Testament 42.4 (2020): 542-52.

"Is Jesus’ perpetual intercession for his people in Hebrews (Heb. 7.25) understood as a constitutive part of his atoning, high-priestly ministry? Nicholas Moore argues that Jesus’ act of sitting at God’s right hand is the decisive end of Jesus’ atoning sacrifice and so also of Hebrews’ Yom Kippur analogy. Among other points, I argue in response that Jesus’ ongoing absence from his people, status as high priest and current location in the heavenly holy of holies imply that Hebrews’ Yom Kippur analogy extends beyond Jesus’ act of sitting to include his present ministry of intercession. Not only were prayer and atoning sacrifice closely correlated for Second Temple Jews, Hebrews presents Jesus as the high priest who, in his resurrected humanity, is always also the sacrifice in the Father’s presence. Jesus presented himself to the Father once, but he is perpetually the high priest and sacrifice who ministers in God’s presence. For Hebrews, the Yom Kippur analogy (and so also Jesus’ atoning ministry) ends when, like the earthly high priests, Jesus leaves the heavenly holy of holies to return to and again be present with his people (Heb. 9.28). Only then will his followers receive the salvation for which they are waiting. Until that approaching day arrives, Jesus’ ongoing intercession with his Father ensures that his people will be saved completely."
Posted by Brian Small at 11:22 AM No comments:

William Johnsson's important 1973 dissertation, "Defilement and Purgation in the Book of Hebrews" was never published, that is, until now: 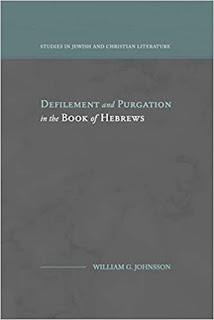 William G. Johnsson. Defilement and Purgation in the Book of Hebrews. Fontes Press.

Abstract:
"At the epicenter of the book of Hebrews stands a prolonged exposition of the Israelite cult. While many studies have focused on the theology of the cult, Johnsson uses a structuralist and religio-historical approach to analyze Hebrews as a religious document that shares anthropological parallels with other major religious groups and their documents.

Johnsson's initial survey of scholarship on the cult in Hebrews lays the foundation for analyzing the key terms of 'defilement,' 'purgation,' and 'blood,' which stand at the heart of the cultic argumentation of Hebrews. These terms and their associated ideas are analyzed closely in their contexts within Hebrews 9-10, which reveals significant theological implications for the human condition as laid out in the rest of the discourse."

I did some of the editorial work on one of the chapters (and it was a ton of work), so I am glad to see it finally in print.
Posted by Brian Small at 9:33 PM No comments:

My Review on Davis, The Place of Paideia in Hebrews' Moral Thought

My review has finally appeared in RBL: 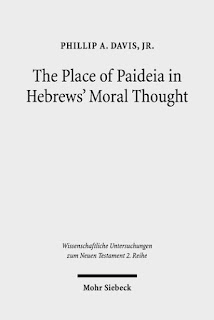 Posted by Brian Small at 5:39 PM No comments:

New Article on Syncrisis and Encomium in Hebrews

The most recent issue of Catholic Biblical Quarterly has the following article:

Abstract: "Although the use of rhetoric to interpret NT texts, even Hebrews, is hardly new, here I employ an unfamiliar, and so unused source of Greco-Roman rhetoric, the progymnasmata (preliminary rhetorical exercises). They provide excellent examples of genres that form the skeleton and substance of the argument in Hebrews." These progymnasmata consisted of twelve to sixteen exercises of increasing difficulty, among which I focus on "comparison" (σύγκρισις) and "encomium" (ἐγκώμιον). Progymnastic rhetoric states that "comparison" are made out of the "headings' of the "encomium." Thus, one comparison is in fact two encomia, for example, Jesus and Israelite priests, each figure described according to traditional encomiastic patterns."

Neyrey claims that hardly anyone has applied the progymnastic exercises of encomium and syncrisis to the Book of Hebrews. He only cites C. F. Evans' slender monograph, The Theology of Rhetoric: The Epistle to the Hebrews. In fact, I deal at length with the progymnastic exercises of encomiastic topics and syncrisis in my monograph, The Characterization of Jesus in the Book of Hebrews. Moreover, Michael Martin and Jason Whitlark deal with syncrisis at length in structuring Hebrews' argument in Inventing Hebrews: Design and Purpose in Ancient Rhetoric. So, in fact, there has been more work done applying the progymnastic exercises of encomium and syncrisis to Hebrews than Neyrey gives credit for in his article. This is a surprising oversight from a scholar of the caliber of Neyrey.
Posted by Brian Small at 12:24 AM No comments:

New Book: Strangers on the Earth

Wipf & Stock have announced the publication of this new book:

James W. Thompson, Strangers on the Earth: Philosophy and Rhetoric in Hebrews.

"Contrary to what we might imagine from its title, the Epistle to the Hebrews is immersed in Hellenistic thought. Its author demonstrates an acquaintance with Greco-Roman rhetoric, and often supports his arguments with the assumptions of Hellenistic philosophy. While he shares the apocalyptic worldview of other Jews in this period, he recasts it with the language of Middle Platonism." 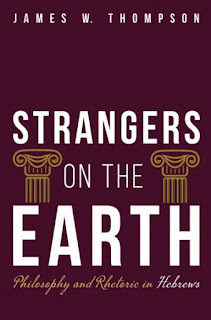