Henry Neufeld makes some remarks on Guthrie on the Authorship of Hebrews.

He also has some reflections on Theology and Exhortation in Hebrews.

Atonement in Hebrews and the Qur'an 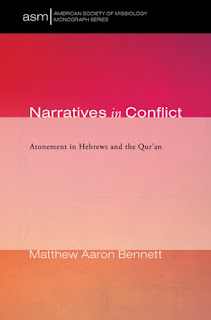 Here is a unique study dealing with Hebrews:

Description from the website:
"Did Jesus die on the cross for our sins as the Gospels describe? Or, as Muslims often contend, was Jesus rescued to heaven in order to avoid the shameful crucifixion that would be unbefitting of a messenger of God? This debate has raged for generations and has caused no shortage of frustration among those seeking to explain the central teaching of the Christian faith to those influenced by the Qur’an. What this book aims to do is uncover four barriers to understanding the biblical teaching on atonement that likely exist in the minds of our Muslim friends prior to asking about the historical reality of the Christ event.

What we will discover is that the Qur’an diverges from the biblical teaching on atonement at the lexical, ritual, narrative, and worldview levels. Each of these points of divergence presents a barrier to communication. Therefore, before arguing with our Muslim friends that Jesus died on the cross, we must provide an answer to the prior question, why would it matter? This book argues that the Letter to the Hebrews provides a particularly helpful biblical starting point for overcoming all four barriers."

Here is the abstract of the work which is based on his doctoral dissertation with Southeastern Baptist Theological Seminary in 2017:

"As the last 1400 years of Christian–Muslim dialogue have demonstrated, there are several areas of Islamic theology and Qur’anic claims that conflict with the message of the Bible. One such area of conflict is at an area of vital concern to the Bible: the concept of atonement. In the Hebrew Bible atonement is a logically unified concept whereby God grants his people means of achieving forgiveness and purification by accepting the blood of a sacrificial animal as a ransom–purgation. The book of Hebrews highlights the way the Christ Event accomplishes atonement by connecting Jesus’ death, resurrection, and ascension with the ritual actions of the high priest on the Day of Atonement.

The Qur’an, however, despite both claiming to continue and complete prior revelation and while including similar language often understood to mean atonement, teaches a very different doctrine of forgiveness. Despite the presence of the component parts of biblical atonement—sacrifice, forgiveness, purification, ransom, blood—the Qur’an keeps each aspect conceptually separate from the others. Such separation is most clearly seen in the Qur’an’s refusal to acknowledge blood’s role in achieving forgiveness or purification. Thus, while atonement language and the concepts of forgiveness and purification are present in both texts, there is an underlying disunity in the biblical and qur’anic ideas of atonement (conveyed through the Arabic word, kaffāra).

Where many scholars accuse the Qur’an of being blatantly mistaken or ill– informed in its retelling of quasi–biblical narratives, this dissertation will show that a generous reading of the Qur’an reveals a potentially nuanced intertextuality resulting in a PREVIEW xiii different understanding of continuation. Exegesis of Sura 5 demonstrates that the Qur’an sees sacrifice as a demarcation given to mark off new dispensations of revelation. This understanding of the purpose of sacrifice gives the Qur’an the ability to claim to stand in the stead of Judaism and Christianity without having to account for some of the details of underlying meaning and overt ritual. Thus, rather than assuming the Qur’an to be negligent in its treatment of Jewish and Christian atonement, the Qur’an simply makes a different claim to continuation than the book of Hebrews makes.

Ultimately, Hebrews offers a narrative–driven answer to the question, “Why did the Christ Event occur as the Bible indicates?” In so doing, it challenges the Qur’anic claims to continuation of prior revelation more forcefully than does the mere factual question, “Did the Christ Event occur as the Bible indicates?” The affirmative answer given to the latter question gains impact through understanding the whole biblical narrative that the Christ Event brings to a climax. The book of Hebrews demonstrates the climactic nature of the Christ Event, and thus its portrayal of Christian atonement coheres more seamlessly with biblical ritual, metanarrative, and worldview than does the disjunctive metanarrative suggested by the Qur’an. Ultimately, the argument of this dissertation is that Christ’s fulfillment of the Day of Atonement, as presented in the Book of Hebrews, exposes distinct worldviews between the Qur’an and Bible, and can be used to challenge Qur'anic claims to completing prior revelation."

Dissertation on the Use of Psalm 102 in Hebrews

I want to thank Jon Rinker for sending me a copy of his dissertation:

Jon is the Vice President for Development and Chair of Bible/Theology Deptment at Appalachian Bible College.

With his permission, I print the abstract:

"The heavy use of Old Testament quotation in Hebrews is spawned in Heb 1 as the author describes the glory of God’s revelation in his Son. This dissertation considers how the author of Hebrews uses one of those quotations, LXX Ps 101:26–28 in Hebrews 1:10–12, in order to show the significance of this quotation for his exposition and exhortation.

Chapter two explores the structure and message of Ps 102, which weaves lament for suffering and the unrealized Davidic promises, along with a hymn of praise that envisions these promises fulfilled in Zion’s restoration. Chapter three examines Ps 102:25–27 in its OT context. On the surface, this prayer acknowledges Yahweh as the eternal and changeless Creator. However, in light of the psalmist’s desperate suffering, his prayer demonstrates a persevering trust in Yahweh’s word, although still unfulfilled.

Chapter four turns to examine the literary and historical contexts of Hebrews, noting the serious threats to the faith of the recipients, and the author’s expository and hortatory aims in order to warn and comfort his congregation. Chapter five closely examines Heb 1:10–12 in the argument of 1:1–14 and its distant parallel in 12:25–29.

Chapter six examines the text form of the citation, noting its origin in the LXX, and the questions this raises about the author’s hermeneutical warrant. Next, this chapter provides a detailed exegesis of 1:10–12 in order to discern its meaning and significance in context. The conclusion here is that the psalm citation at Heb 1:10–12 makes a strong contribution to the author’s portrayal that Jesus has been appointed as the Davidic heir who rules in the world to come, fulfilling the promises for Israel’s restoration in Zion.

Chapter 7 broadens the scope to consider the quotation’s contribution of the argument of Hebrews. The conclusion here is that Heb 1:10–12 is foundational for both the author’s exposition on the Son, and his exhortation to the sons. Finally, chapter 8 summarizes this study, notes some of its unique contributions, and suggests opportunities for further study."

An entire issue of Zeitschrift für Neues Testament (Volume 15, Issue 29, June 2012) is dedicated to Hebrews and is available for download 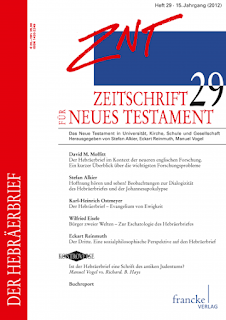 Posted by Brian Small at 1:34 AM No comments: