I just learned about a book on Hebrews that is in the works:

Jon C. Laansma and Daniel J. Treier are editing a collection of essays: Christology and Hermeneutics: Hebrews as an Interdisciplinary Case Study. Library of New Testament Studies. London T & T Clark International. Due out: May 2012.

This is what I have been able to ascertain about the contents thus far:

D. Jeffrey Bingham - a chapter on Irenaeus and Hebrews

Kelly M. Kapic, "A Theological Reading of the Book of Hebrews in the Seventeenth Century: John Owen."

Audio messages from the Southwestern Baptist Theological Seminary's 2010 Advanced Expository Preaching Conference featuring the book of Hebrews are now available.  These will be added to the multimedia page. 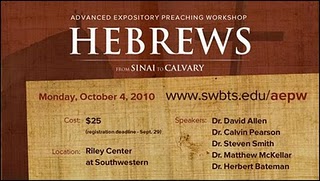 On a personal note, David Allen mentioned me and my blog at the conference (around the 3:50 mark).

Posted by Brian Small at 6:34 PM No comments:

I took advantage of the Wipf & Stock SBL discount to purchase two books on Hebrews:

Annang Asumang. Unlocking the Book of Hebrews: A Spatial Analysis of the Epistle to the Hebrews.

"While the intensely captivating language of the Epistle to the Hebrews may stir and invigorate modern New Testament readers to renewed spiritual energy, readers often remain clueless as to the book's overall theme and message. Despite the tendency for preachers to use various verses of the book of Hebrews as proof texts, few preachers today systematically expound the passages of Hebrews so that its general thesis is more clearly understood, so that it is practically applied for daily Christian living and witness. The different proposals about the epistle's uniting argument have not resulted in scholarly consensus; neither have they diminished the common impression about the epistle's difficulty. For such an important book of the Bible, given that the book of Hebrews skillfully bridges our understanding of the two testaments into one whole, such a situation is, to say the least, unsatisfactory.

The Epistle to the Hebrews utilizes the language of spaces in its expositions and the language of movement in its exhortations, with powerful rhetorical effects; yet few studies have attempted to analyze the book from this perspective. In this study, Asumang employs models from the interdisciplinary social-science investigative methodology of spatiality to analyze Hebrews. He demonstrates that the author of Hebrews interpreted the migrating camp of the Israelites in the wilderness, depicted in the book of Numbers, through a Christ-tinted lens and that the Hebrews writer applied these lessons to the grave pastoral condition of his congregation. When examined from this perspective, the Epistle to the Hebrews proves to be a most potent recipe for spiritual formation and Christian discipleship today."

"For centuries the New Testament book of Hebrews has been interpreted as though it had been written for Jewish Christians in danger of lapsing back into legalism and religious ceremony. This view is now being challenged by current scholarship. Rather than attacking the Old Testament and Judaism, the author of Hebrews praises the person and work of Jesus through a series of comparisons on which he bases exhortations and warnings to the present people of God. Hebrews urges God's people to learn from past mistakes and failures, and to take up the challenge in difficult times to live faithfully in the new relationship to God through Jesus, God's Son.

In The Second Chance for God's People: Messages from Hebrews, Quaker pastor and professor Timothy W. Seid encourages today's church to respond to the challenge of Hebrews: first individually by progressing in spiritual and moral maturity, and second collectively by being God's faithful people in the world. In the light of ancient Greek language and rhetoric after having extensively researched Hebrews, Seid interprets the text of Hebrews section by section in an accessible and nontechnical way while also illustrating and applying the meaning of the text for the contemporary church."
Posted by Brian Small at 1:00 PM No comments: 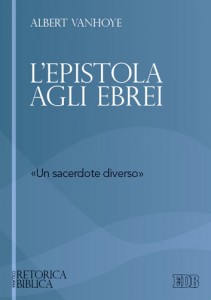 Albert Vanhoye, born in 1923 in Hazebrouck (France), entered the Society of Jesus in 1941. He was licensed in literature at the Sorbonne, in philosophy and theology in the school of his order, and earned his Doctor of Sacred Scripture from the Pontifical Biblical Institute in Rome, with a thesis on the literary structure of Hebrews. He taught biblical exegesis in Chantilly (France) and then, from 1963 to 1998, New Testament exegesis and theology at the Biblical Institute, where he was also rector. He was a member of the Pontifical Biblical Commission from 1984 to 2001, serving as secretary from 1990 to 2001. He is the honorary president of the International Society for the Study of Biblical and Semitic Rhetoric. In 2006 he was created cardinal by Pope Benedict XVI.
Posted by Brian Small at 1:38 PM No comments:

European dissertations can be found at the following link:  DART-Europe E-theses Portal.

I have found the following dissertation which has now been added to the dissertations page:

Winder, Timothy J. "The Sacrificial Christology of Hebrews: A Jewish Christian Contribution to the Modern Debate about the Person of Christ." Ph.D. diss., Leeds University, 2005.

Update: I have a few more entries to the dissertations page.  Several of these dissertations are found on EThOS which requires one register with their service, but the registration is free and so are the electronic downloads.
Posted by Brian Small at 5:14 PM No comments:

David McCheyne Moffitt. "A New and Living Way: Atonement and the Logic of Resurrection in the Epistle to the Hebrews." Ph.D. diss., Duke University, 2010.

This one is worth looking at.  I thought his paper at SBL was outstanding.
Posted by Brian Small at 3:39 PM No comments:

I have updated the New & Forthcoming page.  You have to scroll to the bottom for the forthcoming titles.  I have added Cynthia Westfall and Herbert W. Bateman.  I know of another volume that is in the works, but I have been sworn to secrecy regarding that one (how's that for a tease?).  If you know of any other volumes on Hebrews that are in the works, I would appreciate anyone letting me know.
Posted by Brian Small at 3:09 PM No comments:

This is late because my computer was down for the last week and a half in November.

Interest in Hebrews among the biblioblogs seems to have diminished to a trickle the last few months.

However, Charles Savelle is commenting,  identifying Five Contributions of the Book of Hebrews.  He then offers A Brief Summary of Hebrews 1:1-10:18 and some thoughts on Hebrews 1:1-3.

T.C.R. can only shake his head at the note that the Reformation Study Bible makes on the "Warning Passages" in Hebrews.

Jim Allman comments on Access to God in Hebrews 10 here, here, and here.

David Larsen summarizes Silviu Bunta's SBL paper, "The Convergence of Adamic and Merkabah Traditions in the Christology of Hebrews."  (I missed this paper, unfortunately, because the paper was not given at the time stated in the program book).
Posted by Brian Small at 1:49 PM No comments:

At SBL I only purchased one book (a new record low): Peter O'Brien's commentary on The Letter to the Hebrews with the Pillar commentary series.  Gary Cockerill told me that he thought it was the best commentary on Hebrews to date (that is, until Dr. Cockerill's commentary is published).  ;-) 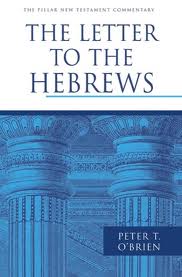 One of the fun things about going to SBL is meeting people from all over the world.  After the second section on Hebrews I met Jordi Cervera, who is a professor with the Facultat de Teologia de Catalunya in Barcelona.  I discovered that he has written a dissertation on Hebrews, which I never heard of before--that's because it is written in Catalan.  His 1999 dissertation is entitled:

Well, I discovered some online articles of his, which will posted under electronic articles: