An Encounter with God

"Scholars acknowledge that most ancient people experienced the written text of Hebrews by hearing it read out loud. Several studies also recognize the book’s emphasis on divine speech. However, research has not examined how the occurrences of divine speech in Hebrews would have been spoken by the person reading the text once it arrived at its intended destination or how the speech would have been perceived by the communities that heard it recited. The oral cultural context from which Hebrews originated decisively shaped the form and delivery of the written divine speech and must be considered in any analysis. In this study I will address this gap by examining how the divine word from Psalm 95 cited in Hebrews 3:7–11 might have been vocalized in its original context and examine the kinds of rhetorical appeals the author made to the audience."

Posted by Brian Small at 6:14 PM No comments:

Review of Schreiner's Commentary on Hebrews 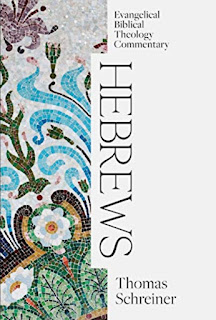 Posted by Brian Small at 5:53 PM No comments:

Hebrews and Supersessionism with Madison Pierce: 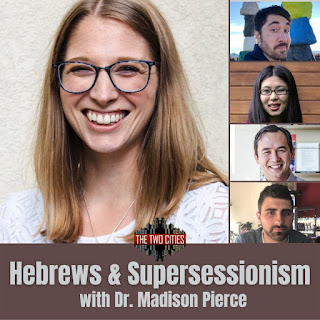 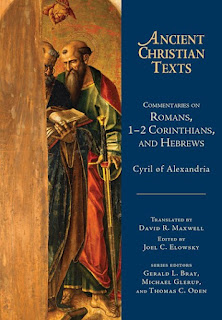 "Cyril of Alexandria (c. 378–444) was one of the most significant figures in the early church: bishop of the church, defender of orthodoxy, proponent of Alexandrian theology. Indeed, he is probably best known as the supporter of the term Theotokos (God-bearer) with regard to Mary in opposition to Nestorius during the early Christological controversies.

But Cyril viewed himself, first and foremost, as an interpreter of Scripture. In this volume in IVP Academic's Ancient Christian Texts series, Joel Elowsky and David Maxwell offer—for the first time in English—a translation of the surviving Greek and Syriac fragments of Cyril's commentaries on four New Testament epistles: Romans, 1–2 Corinthians, and Hebrews.

Abounding with Cyril's insights regarding these canonical texts and biblical themes such as the triune nature of God, Christ's sacrificial death, and justification, these commentaries are essential tools for understanding Cyril's reading of Holy Scripture.

Ancient Christian Texts is a series of new translations, most of which are here presented in English for the first time. The series provides contemporary readers with the resources they need to study for themselves the key writings of the early church. The texts represented in the series are full-length commentaries or sermon series based on biblical books or extended scriptural passages." 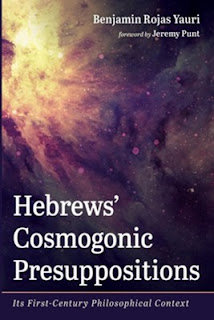 "This book answers the following question: what was the mindset about the creation of Hebrews' author? This book shows a summary of Hebrews' assertions on the origin of everything, i.e., on cosmogony. This book introduces a new methodology which allows the discovery of a document's position on topics other than its main topic, i.e., a methodology that could be termed a "text-linguistic exclusion" and which consists of four steps: 1) identification, 2) exclusion, 3) simplification, and 4) organization. Finally, this book shows that the relationship between Hebrews and its first-century philosophy is not antagonistic or confrontational, since Hebrews seems not to try to correct these other cosmogonies but only presents its particular and coherent point of view."

Posted by Brian Small at 9:52 AM No comments: