New Book on Hebrews Coming Out This Month

Here is the newest book to come out on Hebrews: 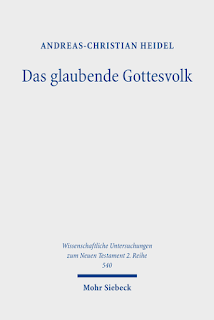 Andreas-Christian Heidel. Das glaubende Gottesvolk: Der Hebräerbrief in israeltheologischer Perspektive [The Believing People of God. The Letter to the Hebrews in the Perspective of Jewish Theology.]. Wissenschaftliche Untersuchungen zum Neuen Testament 2. Reihe 540. Tübingen: Mohr Siebeck: 2020. XIII + 328 pages.
"The Epistle to the Hebrews is often accused in academic and church statements of having a negative relationship to Judaism or of having promoted an anti-Jewish attitude throughout history. Yet contrary to this frequent criticism, neither Old Testament tradition nor the role of Israel is marginalised in Hebrews. In his exegetical study, Andreas-Christian Heidel shows that by rereading the letter’s overall theological testimony based on Heb. 11:39–40, an ecclesiological plan of the salvation of God can be expressed in analogy to Rom. 9–11. The aim of this plan is the eschatological unification of the one believing people of God, running through all ages, places and human identities as an invisible community. This unity is not jeopardised by the meaning and the confession of Jesus as Christ, but is in fact guaranteed by it."
HT: Cliff Kvidahl
Posted by Brian Small at 6:20 PM No comments:

A Discourse Analysis of Hebrews

Hebrews at the Annual SBL Meeting

The following papers on Hebrews will be delivered at the annual meeting of the Society of Biblical Literature, which will be done virtually this year:

Theme: Research Group - The Relationship between the Old Testament and the New Testament

Hebrews as Participatory Exegesis of the Old Testament (20 min)

Accepted paper for the IBR Research Group on The Relationship between the Old Testament and the New Testament.

Theme: Theological Interpretation of the Book of Hebrews

Michael J. Rhodes, Union University
On the Road to Perfection: Divine and Human Agency, Moral Transformation, and the Epistle to the Hebrews (25 min)

God’s transformation of believers constitutes a major theme in the epistle to the Hebrews. The author speaks of Christians being brought to glory (cf. 2:10), being made holy (cf. 10:14), having the Lord’s laws written on their hearts and minds (cf. 10:16), having their consciences sprinkled clean (cf. 10:22), being purified (cf. 10:22), and, perhaps most strikingly, moving on to “perfection” or “maturity” (cf. 5:14-6:1). Such transformation frees God’s people from acts that lead to death so that they might minister to the living God (9:14). Divine agency is thus emphasized in this process of human transformation, but, intriguingly, human acts of moral and spiritual formation also play an essential and constitutive role in the process. The perfection that the author ascribes to Christ-followers is both gift and human task: the author calls the audience to move on to perfection/maturity (Heb 5:14, 6:1); speaks of the “training” that leads to moral discernment (5:14) and the “discipline” that allows for sharing in God’s holiness and produces righteousness in those trained by it (12:10); and calls the audience to pursue the very holiness that we might otherwise have thought was simply a gift to be passively received (12:14). Hebrews insists, in other words, that humans participate in God’s transformation through exercising their renewed human agency in concrete acts of moral and spiritual formation. This paradox makes Hebrews an ideal text for a theological exploration of divine and human agency in the life of faith. Indeed, Aquinas himself turns to Hebrews 5:11-14 in a pivotal discussion of how the believer’s reception of the infused virtues—themselves gifts that God “works in us, without us” (ST I-II q. 55, a. 4)—nevertheless demand and include human agency in the process of those virtues taking root in the believer’s life (ST II-II q. 24, a. 4). Taking Aquinas’s interpretation of Hebrews 5:11-14 as a starting point, in this paper I explore the interaction of divine and human agency in the process of human transformation within the epistle. I will argue that Hebrews both commends specific character-forming practices and understands such practices as human acts of formation that flow out of and participate in the Triune God’s transforming work. I will pay particular attention to areas of continuity and discontinuity between Hebrews’ account of moral growth and discussions of habituation and the virtues within both the first century and in later Thomistic developments in virtue ethics. Having demonstrated that the exalted depiction of the Triune God’s transforming work paradoxically leads to a greater emphasis on human participation in that work, I will conclude by reflecting on how this exploration clarifies aspects of a theological account of the interplay of divine and human agency in the process of moral growth; furthers our understanding of the ethics of Hebrews as a whole; and has implications for contemporary theological ethics concerned with issues of character, virtue, and formation.

This paper discusses the quotation of Ps 2:7 in Heb 1:5 with a focus on the phrase “today I have begotten you.” Patristic interpreters found in this expression a description of the Father’s eternal begetting of the Son. Modern scholars have generally rejected this interpretation as an imposition of later dogmatic theology on the epistle to the Hebrews. Instead, they have suggested that the word “today” may refer to 1) the birth of Jesus or the incarnation; 1) his baptism and/or transfiguration; 3) his resurrection; 4) his ascension; or 5) the eschatological “now.” This paper takes a fresh look at these different interpretations and argues that the reference to the eternal generation of the Son is the one that is most compatible with the argument in the epistle. The patristic development of the doctrine of the Son’s eternal begetting has important points of contact with the argument of Hebrews.

Theological Interpretation of Scripture and ressourcement of Scripture’s reception history have been two of the most interesting and promising developments in the last few decades for the constructive task of theology. A recurring question in these conversations has asked what such work looks like in practice, as opposed to mere meta-level reflection or prolegomena, and this study represents one such instance of applied theological interpretation. Though the doctrine of simplicity fell on hard times in modern theology, simplicity has received fresh and invigorated attention over the last few decades among theologians variously interested in retrieving classical theism, such as the late John Webster, and more recently by Duby, Levering, Sanders, Sonderegger, Swain, Wittman, and others. However, it is common for simplicity to meet at least three significant objections. First, some biblical scholars raise concerns that the metaphysical considerations entailed by simplicity can only be read anachronistically into biblical texts rather than historically substantiated. Second, some theologians likewise suggest that simplicity represents a philosophical abstraction that is less exegetically straightforward than other theological loci, object to simplicity as conflating all of God’s attributes into one, or reject the ontological entailments of simplicity out of preference for dynamism in theology proper; last, communities of faith might find simplicity more abstractly speculative than relevant or practical to the life of faith. To aid with these three questions, this paper contributes a close reading of Hebrews 6:13–18, attuned to its theological logic within its historical context and reception history. In this passage, an attribute no less pastoral than the trustworthiness of God is described in terms of God’s swearing an oath “by himself,” there being none greater by whom to swear (6:13). My argument is that in Hebrews 6:13–18 God’s trustworthiness is not a component part of God, nor some yet greater and extraneous reality that God participates in, but uses a logic that later interpreters appropriately described in terms of simplicity. The first part of this paper recaps the current state of discussions of simplicity in theological interpretation of Scripture. The second part exegetically explores the relationship between God’s being and attributes in Hebrews 6:13–18, read in conversation with texts on God’s self-oath in Gen 22:16; Isa 45:23, 62:8; Jer 22:5, 44:26, 49:13, 51:14; Amos 4:2, 6:8, 8:7; and Philo Alleg. Interp. 3.203. Part three briefly probes how Hebrews 6:13 has factored into historic discussions of simplicity by Aquinas, Thomas Boston, and others. The final part of this paper draws out the constructive value of the logic of simplicity on divine trustworthiness in three ways: first, the value of this reading for projects of theological interpretation and/or retrieval of simplicity; second, the questions this passage poses against biblicistic rejections of simplicity; and third, the pastoral value of divine simplicity and divine trustworthiness for insiders and outsiders to communities of faith, who might dismiss simplicity as overly abstract, impractical, or even harmful and toxic.

Theme: Intertextuality in the Epistles

Julie M. Leyva, Duke University
God Said It Where? Tracing a Mystery Citation in Hebrews 13 (19 min)
n many and various ways, scholars have illuminated the way Israel’s Scriptures function as divine discourse in Hebrews. This paper examines one specific instance of divine speech in Hebrews: “I will never leave you or forsake you” (13:5), and assesses several potential scriptural sources. Although the citation does not match exactly any extant passage in the LXX/OG, commentators have nominated various sources, including Genesis 28:15, Deuteronomy 31:6-8, Joshua 1:5-9, and 1 Chronicles 28:20, though they devote little attention to defending any of these choices. This paper will explore each of these potential sources, noting themes within their literary contexts that might connect to the situation in Hebrews. After assessing the merits of these possible scriptural quotations, we will argue that the author of Hebrews may not have had any one text in mind but rather invoked an often-repeated divine promise from Israel’s Scriptures as a word of assurance to his audience, living as they were in uncertain circumstances.

Posted by Brian Small at 1:43 PM No comments:

Hebrews at the Annual ETS Meeting

There are just a few papers on Hebrews that will be delivered at the annual meeting of the Society of Biblical Literature, which is being done virtually this year.

Michael McKay (Cedarville University)
Is Joshua a type of Christ in Hebrews 4:8?: An argument from context and Nomina Sacra

Posted by Brian Small at 1:24 PM No comments: