A Long Review of a Short Book

Phillip Long reviews Adrio König, Christ Above All: The Book of Hebrews. 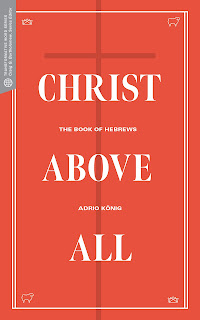 Hebrews at the International SBL

The following are abstracts of papers on Hebrews that were delivered at the recent international SBL meeting in Rome, Italy (HT to Gregory Lamb for making these available):

Albert Coetsee, North-West University (South Africa)
Hebrews 12:9 Revisited: The Background of the Phrase “and Live” (30 min)
The a fortiori argument of Hebrews 12:9b asks: “Shall we not much more be subject to the Father of spirits and live?” (ESV). The majority of scholars agree that the reference to “the Father of spirits” (τῷ πατρὶ τῶν πνευμάτων) probably echoes Numbers 16:22 or 27:16, although other possibilities are also pursued (e.g. 2 Mac 3:24; Jub 10:3; 1 Clem 59:3; 64:1; 1 Enoch 37:2). However, when it comes to the possible background of the result clause “and live” (καὶ ζήσομεν), most scholars are silent. The majority of those that venture to propose a possible background, vaguely refer to Proverbs 6:23b (“the way of life [is] reproof and discipline” [καὶ ὁδὸς ζωῆς ἔλεγχος καὶ παιδεία]). Only a handful of scholars take another route by arguing that in the whole of Hebrews 12:5-11 the writer exegetes Proverbs 3:11-12 on the basis of Deuteronomy 8:2-5, and consequently propose the latter as the background of these verses (cf. Allen 2008; Thiessen 2009; Kibbe 2016; Spellman 2016). Of these, only one explicitly links the result clause “and live” to Deuteronomy 8:5, and he does this in passing (Allen 2008). In this paper I argue that the background of the clause “and live” in Hebrews 12:9 is Deuteronomy 8:1-5 on the basis of the grammar, context and argument of both passages. Not only does obedience to God which results in life have a strong Deuteronomic ring to it, but the nuance of the concept of “life” in Deuteronomy 8:1-5 and Hebrews 12:9 is strikingly similar. This paper contributes to the small but growing amount of studies on Deuteronomy in Hebrews, and also the even smaller amount of studies done on Hebrews 12:5-11.

Kyu Seop Kim, Asia United Theological University
The Concept of Διαθήκη in Hebrews 9:16–17 (30 min)
Many exegetes assume that testaments were of immediate effect when they were written, and that it was common to transfer the unrestricted ownership of property to heirs regardless of the testators’ death in Greco-Roman society, but these assumptions are not sustainable in its historical context. In documentary papyri, the transfer of patrimonum rarely took place during the lifetime of the testator, and the death of the testator was a significant prerequisite for the efficacy of the testament. These findings lead the reader to have a new understanding on Christ’s death in Heb 9:16-17: through his atoning death, Christ realised the promise of the inheritance and enabled the believers to participate in ‘the promised eternal inheritance’ according to διαθήκη.

Silviu N Bunta, University of Dayton
Hebrews 9 and the Temple-Sinai Tradition: A Reinterpretation of “Covenant” (30 min)
Ever since the early Middle Ages the concept of covenant, interpreted along contractual lines, has dominated many Christian theologies. This paper argues that, at a closer look at the “covenant” vocabulary in late Second Temple Judaism, Hebrews 9 can be instrumental in recovering an older understanding of the concept, that of an inherited life that God gives to humanity in succession of self-offering liturgical communions. It is particularly significant that Hebrews 9 frames the Christian communion precisely in this sense, a “new” handing down of the same inheritance (like a passing down of the same inheritance to a new generation of heirs). The argument is also made here that, instead of the prevailing contractual vocabulary, the ancient language of liturgy and the modern language of fluency seem to be more appropriate in deciphering the complex ancient realities behind “covenant.”

Madison N. Pierce, Trinity Evangelical Divinity School
The World Spoken through the Son: Divine Speech and Creation in the Epistle to the Hebrews (30 min)
In Hebrews, a word establishes a priesthood, offers an unchanging promise, and creates the visible out of that which is invisible. The author of Hebrews highlights the power of speech in two ways: first, through his consistent use of spoken quotations to re-contextualize Scripture for the contemporary age, and second, through his frequent appeal to divine speech acts that alter the course of history. One such speech act is his creation of the world, which the author claims we understand “by faith” (Heb. 11:3). In this paper, I will argue that Hebrews 11:3 is intended to be read christologically by the author of Hebrews so that the "Word of God" is the "Son of God."

Jason A. Whitlark, Baylor University
Hebrews in Eucharistic Liturgies and Ecclesial Art (30 min)
Among modern scholars, Hebrews has played a role in the discussion of the Eucharistic tradition. Often the goal is to identify the presence of Eucharistic practice and belief in Hebrews. For instance, Heb 13:10 (“we have an altar from which those who minister in the tent have no authority to eat”) is seen by some as a palpable reference to the Eucharist. Hebrews 6:4-5 is also believed to substantiate sacramental practices in the community addressed by Hebrews. This paper, however, will consider the ways Hebrews was used by Christians to fortify the observance of the Eucharist. Particular focus will be given to the way in which Hebrews encouraged the use of the meeting of Melchizedek and Abraham in Eucharistic liturgies and ecclesial art to demonstrate that the practice instituted by Jesus was even more ancient than the observances instituted under the Law. This exploration will consider the Roman Canon and the art of Italian churches such as Santa Maria di Maggiore, Sant’Apollinare, San Vitale, San Marco, San Rufino, and the Baptistery of Parma. We will also consider presentation of the meeting of Melchizedek and Abraham in Vienna Genesis, the Stavelot portable altar, the art of Peter Paul Rubens, the art of Coptic Churches, and responses by some Protestants.

Broz Jaroslav, Charles University of Prague
Function of Philoxenia and Its Motivation in Hebrews 13:2 (30 min)
An exhortation to hospitality (philoxenia) in Hebr 13:2 is one of hints indicating the situation of addressees of the Epistle. The concept will be discussed in the context of hospitality in its Mediterranean setting and in the Biblical and Jewish tradition. Based on the analysis of the text and of additional extrabiblical data the real situation of recipients of the Epistle will be proposed and confronted with the current solutions of their identity.
Posted by Brian Small at 6:23 PM No comments:

Max Botner reviews Philip Church, Hebrews and the Temple: Attitudes to the Temple in Second Temple Judaism and in Hebrews in the latest batch of RBL reviews. 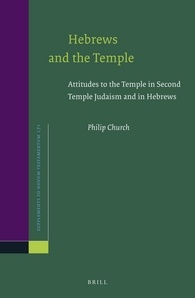 Posted by Brian Small at 7:08 AM No comments: