Essays on John and Hebrews 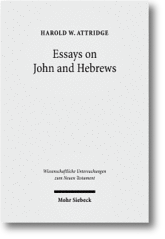 Mohr Siebeck has announced the publication of a new book:

Harold Attridge. Essays on John and Hebrews. 2010.
The blurb from the catalog:
Harold W. Attridge has engaged in the interpretation of two of the most intriguing literary products of early Christianity, the Gospel according to John and the Epistle to the Hebrews. His essays explore the literary and cultural traditions at work in the text and its imaginative rhetoric aiming to deepen faith in Christ by giving new meaning to his death and exaltation. His essays on John focus on the literary artistry of the final version of the gospel, its playful approach to literary genres, its engaging rhetoric, its delight in visual imagery. He situates that literary analysis of both works within the context of the history of religion and culture in the first century, with carefeul attention to both Jewish and Greco-Roman worlds. Several essays, focusing on the phenomena connected with "Gnosticism", extend that reiligio-historical horizon into to the life of the early Church and contribute to the understanding of the reception of these two early Christian masterpieces.
I suspect, without having seen the book, that it is a collection of his earlier essays on the books.
Posted by Brian Small at 5:20 PM No comments:

We are only halfway through the month of February and already there has been considerable discussion on the Book of Hebrews this month. So, I thought I would make mention of those posts we have thus far, rather than waiting until the end of the month:

Rafael Rodríguez criticizes another scholar who portrays the author of Hebrews as someone who was not bound by cultural constraints, while addressing an audience that was bound. Rather, The author of Hebrews was himself bound in the first century CE.

Joel Watts argues that the author of Hebrews mined the Old Testament for theological truth about Christ and the Church, not historical fact.

Joel Watts also reflects on Hebrews 11:1-3 noting that faith is not merely a belief system but action and commitment.

Steven Coxhead expounds on The Concept of Faith in Hebrews. He concludes that "the concept of faith in the book of Hebrews confesses that Jesus is the Son of God, but it also includes a strong assurance that the fullness of what God has promised will come true (Heb 11:1), which results in power to persevere despite opposition."

Coxhead also ponders the Similarities in the Concept of Faith between Paul and the Author of Hebrews.

Brant Pitre claims that Hebrews does envision a new ministerial priesthood. Hebrews 7:12 suggests a change in the priesthood, not a dissolution. He interprets the "altar" of 13:10 to refer to the Eucharistic sacrifice. The post has provoked a considerable discussion.

Peter Kirk responded with a post of his own, Only One New Priest and Sacrifice, contending that the new priesthood Hebrews envisions is found in only one person, Jesus Christ. Hebrews 13 is not arguing for a special caste of priests offering the sacrifice of the Mass, but indicates that all believers offer up sacrifices of praise and good works.

In his discussion of Jesus and the Heavenly Sanctuary, Long notes that Jesus' priesthood and sacrifice is superior because Jesus serves in a heavenly sanctuary.

Long also identifies four things from Hebrews 10:32-39 that the audience of Hebrews suffered in their endurance in the Christian faith.

Long also muses about the midrashic use of The Old Testament in Hebrews.

Ken Schenck exults that his monograph Cosmology and Eschatology in Hebrews: The Setting of the Sacrifice is now available in a more inexpensive paperback. Finally, the book is now within my price range!

Clifford Kvidahl queries What Do Calvin and Arminius Have to do with Auctor? He concludes that one must not impose an anachronistic Calvinist or Arminian reading on the warning passages in Hebrews, but that they must be understood within their literary context.

Brian Tucker reports that Jeffrey Gibson argued at the SBL Midwest meeting that the Sitz im Leben of Hebrews was the Jewish War and that the author was concerned to address "issues of non-violence in the context of the threat of the Roman and Jewish desire for violent revolt by the zealots."
Posted by Brian Small at 11:59 PM No comments:

Second Review of Kenneth Schenck's Cosmology and Eschatology in Hebrews

Thomas J. Kraus offers a second review on RBL of Kenneth Schenck's Cosmology and Eschatology in Hebrews: The Settings of the Sacrifice. 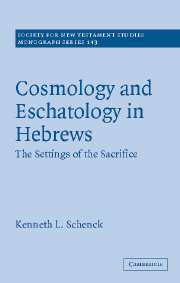 Just arrived from Windows Booksellers, a very nice copy of:

I have the first edition from 1913, so this will be a needed upgrade. At some point in the future I am contemplating having a book giveaway to promote the blog. Stay tuned.
Posted by Brian Small at 3:23 PM No comments: