Ken Schenck has been doing a series on Hebrews, apparently in the process of writing a book:

Jim West has some excerpts of Hebrews 10:25 Among the Exegetes.
Posted by Brian Small at 11:59 PM No comments: 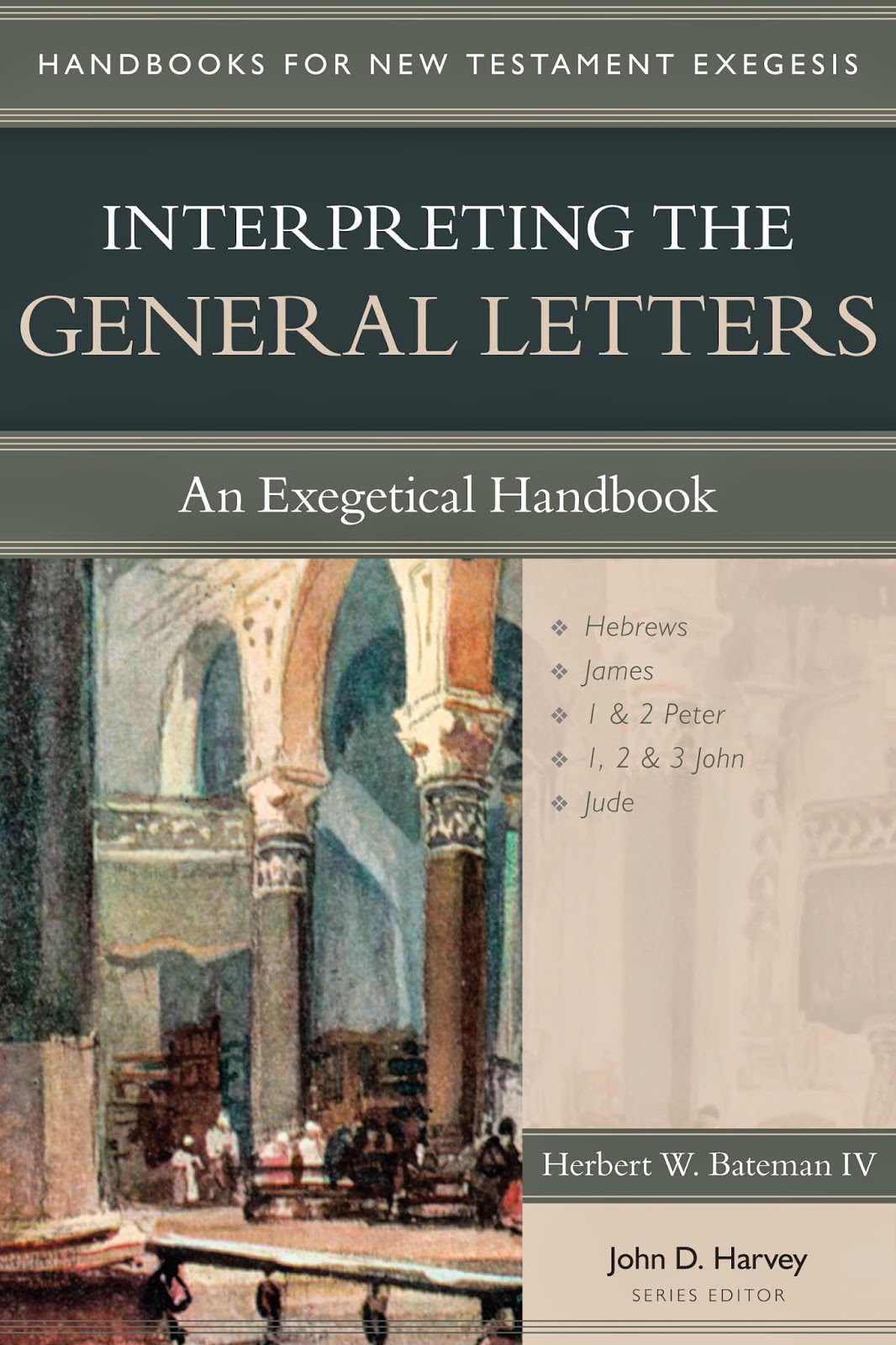 Review of Bateman, Charts on the Book of Hebrews 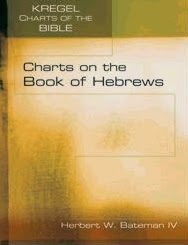 First, I want to thank Kregel Academic for a review copy of this book.

I like the book of Hebrews and I like chart-books, so when the two are combined, it has to be a winning combination. Herbert Bateman has provided us with just such a book in the Kregel Charts of the Bible series.

The book is divided into four major parts. Part one deals with introductory matters such as authorship; destination, recipients, and dating; genre and structure; and canonicity. Part two is concerned with OT and Second Temple influences in Hebrews. This section features charts on OT quotations and allusions, the Jewish cultic system, the high priesthood, and messianic figures. Part three covers theology in Hebrews and is organized under the subheadings of Godhead, theological themes, and words of exhortation. Part four deals with exegetical matters and is divided into interpretive issues, text critical issues, figures of speech, and important words. Bateman comments on these charts towards the end of the book on pages 239–253.

In part one, His first chart on authorship lists many of the proposed authors for Hebrews and the scholar who first proposed it. The chart is not exhaustive as others could have been added to the chart. He identifies 19 options, but I know of at least 23. The next two charts (2–3) contain listings of scholars and their various proposals for the authorship of Hebrews. Charts 4–7 helpfully lay out in turn the pros and cons for the candidacies of Barnabas, Paul, Luke, and Apollos.

Chart 8 surprisingly only lists five locations for the possible destination of Hebrews. As many as fifteen different destinations have been proposed so this chart is by no means exhaustive. Charts 10–12 deal with the recipients of Hebrews whether or not they were Jewish Christians and the evidence of the audience’s regeneration.

Chart 13 weighs four pieces of evidence for the dating of Hebrews: the possibility that they were second generation Christians, the mention of Timothy, the mention of persecution, and the silence regarding the destruction of the temple in Jerusalem.

Charts 16–17 consider respectively the evidence for the genre of Hebrews as a sermonic letter or as letter of exhortation. Chart 19 identifies four options for the structuring of Hebrews: (1) thematic; (2) rhetorical; (3) chiastic literary; and (4) text-linguistic literary. Charts 20–24 identify representatives for each one of these options. Again, the charts are not exhaustive. For example, he only features the rhetorical arrangements of Harold Attridge and Craig Koester. Hence, he omits the important proposals of Walter Übelacker, Keijo Nissilä, James Thompson, and others. Likewise, he only highlights the text-linguistic structure of George Guthrie, but omits the one proposed by Cindy Westfall.

In part two, he begins with a chart (30) identifying 36 quotations from the OT listed according to their appearance in Hebrews. The following chart (31) arranges them according to canonical books. Identifying a quotation can be a little tricky and scholars have offered different numbers for Hebrews. Even more elusive is identifying allusions to the OT. He lists these in charts 32–33. Surprisingly, he lists only two allusions in Hebrews 11. However, this chapter certainly contains many more allusions than that. It raises the question what Bateman considers to be an allusion. He lists OT figures who are named in Hebrews in chart 34.

Charts 35–38 are dedicated to the references to the tabernacle and its component parts, while charts 39–40 list references to OT feasts and the Day of Atonement respectively.

Charts 41–43, 45, 47 include a historical listing of all high priests from the OT, Persian, Hellenistic, Hasmonean, and Herodian periods. He includes charts on the Hasmonean (44) and Herodian (46) family trees.

His remaining charts in this part deal with anointed figures (48), messianic figures and titles (49–50), Melchizedek (51–52), regal priests (53–54), and divine beings (55) in the OT and other early Jewish literature. Again, these charts are probably not comprehensive. For example in chart 51 he only lists references to Melchizedek in the OT, Dead Sea Scrolls, Hebrews, Josephus, and Philo. References in other bodies of literature could certainly be added.

In part three, Bateman begins with a series of charts outlining the portrait of God, Jesus, and the Holy Spirit (56–59). Charts 60–64 deal with parallels to the Jewish wisdom tradition. Chart 65 lists titles ascribed to Jesus and organizes them according to messianic and regal, non-regal, and divine titles. The following chart (66) lists titles of Jesus shared with other NT writings.

The next group of charts (67–82) organizes references to various phrases (e.g., “better than”; “once for all”) and concepts/themes (e.g., covenant, perfection, rest, faith) found in Hebrews. The final group of charts in this section deals with words of exhortations (83), apostasy (84–85), and the warning passages (85–87).  Chart 87 specifically lists six positions on the warning passages in Hebrews and identifies some of the major proponents of each position.

In part four, which deals with exegetical matters, Bateman begins with a series of charts comparing the citations in the Hebrew, the LXX, and Hebrews (88–90). These charts are helpful in getting a side-by-side comparison of the quotations in these three bodies of literature. These kinds of charts can be found elsewhere (i.e., Gleason L. Archer and Gregory Chirichigno, Old Testament Quotations in the New Testament), but certainly needed to be included in this collection.

Charts 94–96 helpfully deal with the manuscript evidence for Hebrews. Chart 97 lists the major text-critical issues (42 of them) in Hebrews. For each of the conflicted readings he gives the significance and an explanation of the issues involved.

Charts 98–101 list various figures of speech and literary devices that are used throughout Hebrews. Chart 102 lists words frequently used in Hebrews. Chart 103 has an alphabetical listing of Greek words unique to Hebrews. I am assuming this is in reference to the rest of the NT and not to the whole body of Greek literature. Chart 104 organizes these hapax legomena according to their appearance in Hebrews.

Bateman has provided us with many useful charts on the book of Hebrews. He organizes and distills vast amounts of information in a readily digestible format. Readers can easily find charts that give an overview of evidence for a contested issue such as the authorship or dating of the epistle, or the various views on the warning passages. Many of the charts provide a nice distillation of background materials that are useful for understanding Hebrews. The charts are very useful for locating references for various words and topics. Bateman should also be commended for his creativity in the variety and types of charts that he provides.

The charts, however, often are not exhaustive. Bateman is heavily dependent on the major English commentaries for the distillation of his information (he gives credit to his sources in his explanations at the back of the book). Hence, many important monographs and articles, not to mention non-English commentaries, appear to be largely overlooked. Naturally, one can attribute these omissions to human finitude; one can accomplish only so much given the limitations in time and space. Nevertheless, the charts are very helpful and can be used as a starting point for further research in Hebrews. I commend the book to anyone who is interested in this fascinating early Christian document.
Posted by Brian Small at 4:37 PM No comments:

First Review of My Book

Well, the first review of my book is in, and it is very favorable. Thanks to Kevin Brown for the review.

Posted by Brian Small at 6:07 PM No comments: