There are three books on Hebrews that are coming up on the horizon--all published in the The Library of New Testament series by T&T Clark: 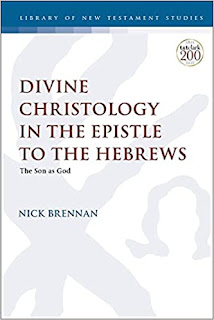 Nick Brennan. Divine Christology in the Epistle to the Hebrews: The Son as God.

"Nick Brennan investigates the depiction of the Son in his divine nature in the Epistle to the Hebrews; despite little attention being given toto the Son's divinity, Brennan argues that not only is the Son depicted as divine in the Epistle, but that this depiction ranges outside the early chapters in which it is most often noted, and is theologically relevant to the pattern of the Author's argument.

Beginning with a survey of the state of contemporary scholarship on the Son's divinity in Hebrews, and a discussion of the issues connected to predicating divinity of the Son in the Epistle, Brennan analyses the application of Old Testament texts to the Son which, in their original context, refer to God (1:6; 10–12), and demonstrates how the Pastor not only affirms the Son's divinity but also the significance of his exaltation as God. He then discusses how Heb 3:3, 4 does witness to the divinity of the Son in Hebrews, explores the debate on the relation of the Son's “indestructible life” (Heb 7:16) to his divinity, and demonstrates how two key concepts in Hebrews (covenant and sonship) reinforce the Son's divinity. Brennan thus concludes that the Epistle not only portrays the Son as God, but does so in a manner which is a pervasive aspect of its thought, and is theologically salient to many features of the Epistle's argument." 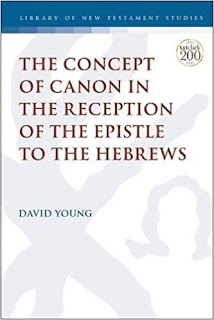 David Young. The Concept of Canon in the Reception of the Epistle to the Hebrews.

"David Young argues that the reception of the Epistle to the Hebrews in early Christianity was influenced by a number of factors which had little to do with debates about an authoritative canon of Christian writings, and which were primarily the concern of a relatively small group of highly educated scholars.

Through careful study of the quotations and reproductions of Hebrews in their own rhetorical and material context, Young stresses that the concept of canon had little bearing on its early reception. By exploring the transformation of authorship into authority, the patristic citations of Hebrews, the Epistle's position in edited collections of the Pauline corpus and the consequences of translation, this complex reception history illustrates the myriad ways in which early Christians thought of and interacted with their scriptures." 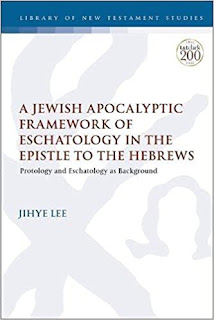 Jihye Lee. A Jewish Apocalyptic Framework of Eschatology in the Epistle to the Hebrews: Protology and Eschatology as Background.

"In contrast to scholarly belief that the author of the Epistle to the Hebrews envisions the transcendent, heavenly world as the eschatological inheritance of God's people, Jihye Lee argues that a version of an Urzeit-Endzeit eschatological framework - as observed in some Jewish apocalyptic texts - provides a plausible background against which the arguments of Hebrews are most comprehensively explained. Instead of transcendence to the heavenly world that will come after the destruction of the shakable creation, Lee suggests the possibility of a more dualistic new world.

By first defining Urzeit-Endzeit eschatology, Lee is then able to explore its place in both pre and post 70 CE Second Temple Judaism. In examining Enoch, the Qumran Texts, Jubilees, the Liber Antiquitatum Biblicarum, 4 Ezra and 2 Baruch and finally the Book of Revelation, Lee compares a multitude of eschatological visions and the different depictions of the transformation of the world, judgement and the new world to come. Bringing these texts together to analyse the issue of God's Rest in Hebrews, and the nature of the Unshakable Kingdom, Lee concludes that Hebrews envisions the kingdom as consisting of both the revealed heavenly world and the renewed creation as the eschatological venue of God's dwelling place with his people."

The Paradox of Sonship

I just received my copy of this newly published book by Intervarsity Press: 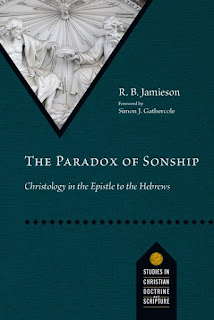 R. B. Jamieson. The Paradox of Sonship: Christology in the Epistle to the Hebrews.

Abstract:
"What does the epistle to the Hebrews mean when it calls Jesus "Son"? Is "Son" a title that denotes his eternal existence as one person of the Trinity? Or is it a title Jesus receives upon his installation on heaven's throne after his resurrection and ascension?

In this Studies in Christian Doctrine and Scripture (SCDS) volume, which promotes fresh understandings of Christian belief through creative, faithful readings of the canonical text, pastor and New Testament scholar R. B. Jamieson probes the complexity of the Christology presented in the epistle to the Hebrews.

Exploring the paradox of this key term, Jamieson argues that, according to Hebrews, "Son" names both who Jesus is eternally and what he becomes at the climax of his incarnate, saving mission. Jesus is, in short, the eternal Son who became the messianic Son for us and for our salvation. This volume thereby offers a case study showing how the church's core convictions about Christ lead us not away from the text, but deeper into it."

Posted by Brian Small at 9:58 AM No comments: