I only recently became aware of this work and have managed to find a used copy from Germany: 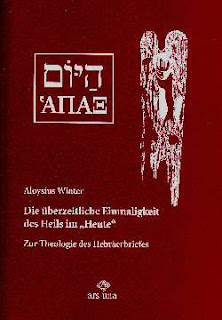 Blurb translated from the back cover:

"The author examines the meaning of the words 'hapax' and 'ephapax' in Hebrews, which are usually translated as 'once for all' and understands them on the basis of their origin and context in the sense of 'once finally' and 'at once finally', which is of considerable importance for sacramental theology. It has been shown that, according to the Platonic-Philonic model, the symbolism of the last 'day' in the pointedly used 'today' presupposes a Greek understanding of time, which was abolished by the God-human act of salvation in the eternal today of God. Thus, the final uniqueness of the 'perfection' effected by Christ is clarified, which is accomplished in 'sanctification' by means of baptism, Eucharist, and other ways, by direct and common participation in the sacrifice which has happened historically and at the same time exists in his person."