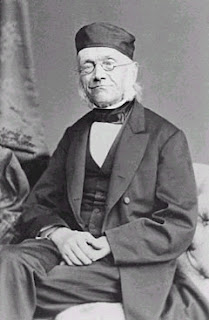 Tholuck next examines the internal evidence.  Individual passages (2:3; 13:23-24) are indecisive for determining Pauline authorship.  No essential difference exists between the doctrine of Hebrews and Paul.  Nevertheless, some differences exist: Hebrews never mentions the importance of the resurrection of Christ, Paul does not discuss Jesus’ high priesthood, and the idea of faith in Hebrews differs from that of Paul’s.  Once again, the evidence is not decisive since the many similarities that do exist between Hebrews and Paul may be attributed to the supposition that an acquaintance of Paul wrote Hebrews.  When examining the language and style of Hebrews, however, Tholuck concludes that they point away from Pauline authorship.  The form of the quotations from the OT (Hebrews universally cites the LXX; Paul does not) and the citation formulas used also speak against Pauline authorship.  Finally, the external arrangement of Hebrews (e.g., the fact that it has no superscription or greeting) also militates against Pauline authorship.

Tholuck continues his discussion of authorship by tracing the history of interpretation on authorship.  From the fourth century onward Pauline authorship was generally affirmed, and it was not until the Reformation that Pauline authorship was again questioned (e.g., by Erasmus, Luther, Calvin).  When considering other candidates for the authorship of Hebrews (Luke, Clement of Rome, Barnabas, Silas, Apollos), Tholuck finally settles for Apollos.  The description of Apollos in Acts 18:24 fits well with what we would expect of the author of Hebrews.

The recipients of the epistle were most likely Jewish Christians living in Palestine as is evident by its attention to Jewish worship and its lack of any allusions to Gentile Christians.  Hebrews was originally written in Greek and not translated from Aramaic, as is attested by its excellent Greek style, and by the fact that the author quotes the LXX and bases his arguments on the Greek text.  Greek would have been widely known even in Palestine.  Hebrews was probably written shortly before the destruction of the Temple in 70 AD.

The goal of the epistle is paraenetic: the recipients were wavering in their faith and in danger of lapsing back into Judaism.  Therefore, to encourage them in the faith, the author shows that the new covenant was a completion of the old covenant.  Tholuck concludes his introduction with a lengthy discussion of the canonicity and authority of Hebrews and an overview of the history of interpretation on Hebrews from the patristic era to the early nineteenth century.

The commentary itself proceeds in a verse-by-verse manner.  The commentary demands high technical skill on the part of the reader as foreign language sources (Hebrew, Greek, Latin etc.) remain untranslated.  The commentary is quite fulsome in some places but surprisingly brief in others places.  It is impossible, of course, to give a detailed account the entire commentary, so I have chosen some representative comments on key passages:

The introduction to the quotation in 1:6 refers to the exaltation of Christ.  Jesus is twice addressed as God in 1:8-9.  On 2:5-9 Tholuck interprets the psalm strictly christologically.  2:16 does not refer to Jesus’ assumption of human nature as was the traditional view from the time of the church fathers.  In 3:2 the expression τῷ ποιήσαντι αὐτὸν refers to God’s appointment of Jesus.  5:7 is an allusion to the scene in Gethsemane.  The subject of Jesus’ prayer was to be delivered from suffering; he was heard in the fact that he accepted that suffering as conqueror.

Tholuck explains 6:4-6 as follows: He who outwardly is thoroughly instructed in Christianity, and has inwardly had all the experiences connected with a life of faith, and then, not from weakness, but willingly falls away, and that the truth which he formerly possessed he now holds for a lie, and thereby profanes the Christ without him, and blasphemes the Christ within him, for this person there is, subjectively, no renewal of a change of mind, and, objectively, no new sacrifice for sins.

In 7:26 the expression “separated from sinners” does not refer to Jesus’ sinlessness but his separation from humanity by virtue of his exaltation into heaven.  In 9:14 the expression “through eternal spirit” refers to the operations of the Holy Spirit in Jesus; it was the impulse for his self-sacrifice.  In 9:16-17 Tholuck takes διαθήκη to mean “testament” and not “covenant.”

In 11:26 the “reproach of Christ” refers to Moses’ suffering after the example of Christ and does not imply that Moses had prophetic insight into the future suffering of Christ.  In 12:2 the expression ἀντὶ τῆς προκειμένης αὐτῷ χαρᾶ refers to the prize for which Jesus endured the shame of the cross, and not to what he gave up for the cross.  In 12:14 κύριον more likely refers to God, not Jesus.  In 12:24 the contrast is that Abel’s blood cried to God’s justice for the avenging of innocence, while Jesus’ blood to the grace of God for the guilty.
Posted by Brian Small at 9:21 PM