The Mysticism of Hebrews 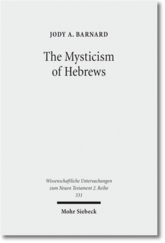 The latest offering by Mohr Siebeck:

Jody A. Barnard. The Mysticism of Hebrews: Exploring the Role of Jewish Apocalyptic Mysticism in the Epistle to the Hebrews.

Synopsis:
"Jody A. Barnard examines the role of Jewish apocalyptic mysticism in the epistle to the Hebrews. Jewish apocalyptic mysticism is defined as a phenomenon occurring in late Second Temple Judaism (including early Christianity), which finds literary expression in the apocalypses and related literature, and exhibits a preoccupation with the realities of the heavenly realm, and the human experience of this realm and its occupants. The author demonstrates that there are numerous apocalyptic and mystical themes appropriated in Hebrews, and that there is evidence to suggest that this is not merely a conceptual and literary phenomenon, but is born out of, and informed by, mystical experience. The cosmology, Christology, and soteriology of Hebrews all belong to the world of Jewish apocalyptic mysticism and are significantly elucidated with reference to this context."
Posted by Brian Small at 2:24 PM