Below is a guest review of Gary Cockerill's new commentary on Hebrews, which I gladly reproduce here with the author's permission.  The review was originally written in Catalan by Jordi Cervera i Valls, but has been translated into English with the help of Scott Mackie.  I echo Jordi's assessment of Cockerill: he is a scholar with a pastor's heart. 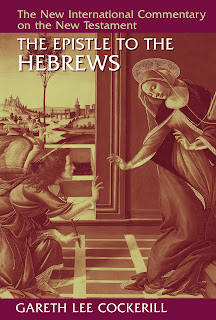 At a recent gathering of Hebrews scholars in San Francisco, Gary Cockerill was asked concerning his forthcoming commentary: “How many pages will it be?” Cockerill replied, blushing slightly, “Nearly eight hundred,” and then, with emotion, he explained it was his opera magna, and that Hebrews was the biblical writing he loved the most and to which he has dedicated his greatest efforts. He also thanked God for all the blessings he received from his study. Indeed, the publication of this commentary represents a personal tribute of gratitude to God for the gifts received during his lifetime.

It is not common to hear such confessions in a biblical congress, even in an intimate circle of colleagues; however, Cockerill is not a common scholar. His decided character, always disposed to talk after a paper’s exposition, the earned respect as a professor of the Wesley Biblical Seminary, his naturalness in gathering with a group of people discussing Hebrews, and his friendly and open manner.

We report these personal details in order to make the point that under every book, there is always a beating heart and a vibrating spirit. In the case of Gary Cockerill’s commentary on Hebrews, this is unquestionable. We should also emphasize that the New International Commentary series is one of the most prestigious and historically significant commentary series in English.

After the editor of the collection, Gordon D. Fee, offers a brief recommendation, Cockerill’s programmatically states that “the exposition does not treat this book at a distance as if it were a laboratory specimen.” He also comments that his intention “is to do more than explicate an ancient document within its context and then draw some analogies for contemporary believers.” He wants to help modern reader “to enter the Christian world of Hebrews and allow that world to reshape their hearts and minds” (p. xiii). It is a yearning that reflects his vocation as a pastor of the Wesleyan Church, the hope and expectation that God’s word will be effective in human lives: “I hope this commentary will help those who approach this ancient but ever-relevant text to hear the word of God has spoken in his Son, enter the divine presence through the cleansing he provides, and persevere through obedient faithfulness in fellowship with the people of God” (p. xiii).

Reading the index of the book (pp. vii-xi), we identify the personal mark that the “Pastor Cockerill” gives, referring to the author of Hebrews, as “the pastor.” In fact, “The pastor who wrote Hebrews” is the first aspect discussed in a section entitled, Hebrews in its Environment; and another section is called, “When Did the Pastor Write This Sermon?” His creativity colors these living titles throughout his discussion of the various status quaestionis of Hebrews (author, canonicity, background, literary genre, audience, dating).

Cockerill deals with potential polemics in his treatment of the addressed community’s identity: were they Jews or Gentiles? He rightly points out that “One can understand Hebrews without identifying either the name of its author or the location of the recipients. One cannot, however, interpret Hebrews without taking a position as to whether the recipients were Jewish or Gentile believers” (p. 19). Distancing himself from the controversial issue of “supersessionism,” he claims that Hebrews never compares Christianity with Judaism, or Israel with the Church. For Hebrews, according to Cockerill, God’s people are, and always has been, the people who hear the word of God and respond with faith and obedience. “There is nothing in this sermon that would demean or marginalize Jews as a people,” he affirms, closing the section with assertion: “One does violence to the text of Hebrews if one forces it to speak otherwise” (p. 23). The first 40 pages finish by prudently dating Hebrews between 50 and 90 CE.

In a section entitled, The Message of Hebrews, Cockerill exhibits excellent lucidity as he discusses the relevance of the exegetical methods used by Hebrews to interpret the Old Testament (p. 57). He proposes the following hermeneutical principles, worthy to be reproduced at length:
First, God’s word in the incarnate, obedient, now exalted Son fulfills all that God Has said. Therefore the Son stands in complete continuity with and fulfills all previous revelation. Second, the Old Covenant with is priesthood and sacrifice has always been and continues to be a type and foreshadowing of the sufficiency of Christ as Savior. It was never meant to be an adequate means of salvation in itself. Third, those who live by faith on the word of God constitute the one people of God throughout history. Their goal has always been and continues to be final entrance into God’s eternal ‘rest’ (p. 59).
These are concise and clear hermeneutical principles, accurately reflecting Cockerill’s empathy with Hebrews and his ability to synthesize and update it.

Another section, The Sermon’s Rhetorically Effective Structure, treats the literary structures proposed by Vanhoye, Guthrie and Westfall. However, Cockerill chooses to divide the writing into three big sections (1:1-4:13; 4;14-10:18; 10:19-12:29). The reason for such a division is the parallel between 4:14-16 and 10:19-25. The first section (1:1-4:13) proclaims the divine revelation in the Son, and warns against disobedience. The second section (4:14-10:18) presents the priesthood of Christ as the fulfillment of his sonship and the content of God’s self-disclosure in the Son. Through this ministry God’s people have both the unprecedented privilege of entering his presence and the intensified obligation for obedience. Thus, the third section urges faithful endurance until Christ’s return, enabled by the sufficiency of his high priesthood (p. 62).

Having thus introduced and structured the writing, the remainder of the work, some 600 pages in length, constitute the commentary proper. Throughout, Cockerill follows a format of Text, Exposition, and Notes. Items are placed with precision and with didactic titles, and exhibiting a balance that will be well appreciated by experts. Explanations are exhaustive but not burdensome, avoiding digressions, yet without sidestepping the complicated nature of some passages.

A nice example occurs in the comments on 9:22: “According to the Law, one may almost say, all things are cleansed with blood, and without the shedding of blood there is no forgiveness.” Cockerill’s comments show how this statement is integrated within his larger argument:  “The pastor has been building his case that the pervasive role of sacrificial blood in the Old Covenant anticipated the cleansing power of Christ blood” (p. 409). He insists that the terms “without blood” and “forgiveness” become crucial, the first highlighting the drama of Christ’s death, and the second describing the benefits of this death (pp. 410-411). We add that the sacrificial theology and the sacrificial system allow us to understand the meaning and value of Christ's death, placing us in the same origin of Christological discourses.

Also illuminative are Cockerill’s comments on 10:1-4:
For the Law, since it has only a shadow of the good things to come and not the very form of things, can never by the same sacrifices year by year, which they offer continually, make perfect those who draw near. Otherwise, would they not have ceased to be offered, because the worshipers, having once been cleansed, would no longer have had consciousness of sins? But in those sacrifices there is a reminder of sins year by year. For it is impossible for the blood of bulls and goats to take away sins.
Cockerill claims that “they describe a system that could not produce salvation but could only anticipate the future by being its opposite and thus by showing the need of what was to come” (p. 428). This comment is commendable and coherent with the hermeneutical principles mentioned in the Introduction, and avoids any charges of supersessionism. His comments on 10:4 underline the confusion caused by this verse’s logic, and the “impossibility” that the blood of goats and calves remove sins. He points that this contradicts 9:22, which states that bloodshed is necessary to get atonement.  He solves this dilemma by saying that the sin of disobedience can only be assumed by Christ’s sacrifice offered once for all (p. 432). The author does not focus on the topic, but hints at the difficulty of these verses, especially 10:4. We go a step further and emphasize that these verses are against the general discourse of Hebrews when previously stated that sacrifices sanctify, purify and forgive sins (cf. 9:13-14; 9:22), a point made again in 13:11-12. This is a delicate issue to solve if we want to be faithful to the overarching intent of Hebrews, but this is not the place to do attempt such an endeavor.

The comments on 12:14-17 begin with the apt title: Don’t sell your Birthright as Esau Did. In this passage, Esau, the “immoral and godless” one, is the personification of apostasy. Cockerill differs from the usual sexual reading of pornos showing that, separately, the two terms lose meaning, but together they reinforce each other to explain the sin of Esau: a rejection of primogeniture, not for fear but by desire. The incredibly ridiculous trade (“a dish of lentils!”), “for which he bartered the eternal attests to the great disdain with which he treated the things of God. Nothing less than both ‘immoral’ and ‘godless’ sufficiently describes this arch-apostate” (p. 639). Esau is rebuked, and the community is effectively warned to not repeat his disastrous example.

In 12:17 there is an enigmatic expression, “place of repentance,” that Cockerill rightly associates with 6:4-8 and 10:26-31 (two severe warning passages). Following the assessment of Koester and Lane, he proposes that this is a technical term that refers to the opportunity of repentance in a moral or religious sense. This theme is present in the wisdom literature (Wis 12:10), Second Temple literature (4 Ezra 7:82, 9:12; 2 Bar. 85:12; 2 En. 62:2) and also in apostolic tradition (1 Clem 7:5; 2 Clem 8:2; Tatian, To the Greeks 15:4). I personally believe this phrase is best illuminated by the Targumic haggadot of  Gen 35:33 and 49:3-4, which narrates a controversial episode: Ruben’s incest with Bilhah. It is a phrase that refers to the delicate issue of the impossibility of repentance, which became a recurring theme in later Christian (HermVis III, 7:5; Ap. Const. II.38:4; V.19:3) and rabbinical traditions (Ber 34b; Sanh 99b).

In conclusion, I am convinced that this commentary represents a new landmark in Hebrews scholarship. All scholars of Hebrews must have it on their shelves! It is clear and comprehensible enough for beginners, and providing the deep details scholars require. We truly join ourselves to the author’s joy about the appearance of this commentary on Hebrews, and welcome this vibrant and intelligent analysis.