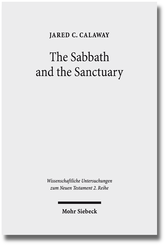 I recently became aware of this upcoming publication:

Calaway, Jared. The Sabbath and the Sanctuary: Access to God in the Letter to the Hebrews and Its Priestly Context. Mohr Siebeck, May 2013.

Here is the synopsis from the Mohr Siebeck website:

"Who can enter the sacred and heavenly presence of God? And how? Various ancient Jewish and emergent Christian groups disputed these questions in the first century CE. Jared C. Calaway states that the Letter to the Hebrews joined this debate by engaging and countering priestly frameworks of sacred access that aligned the Sabbath with the sanctuary. From the Hebrew Bible through late Second Temple Judaism, the sanctity of the sanctuary could be experienced through the Sabbath, sacred space through sacred time. In its sweeping vistas of Sabbath rest and the heavenly homeland, the heavenly sanctuary and the coming age, and the heavenly priesthood, Hebrews reworked this priestly framework, showing familiarity with its traditional and contemporary forms, such as the "Songs of the Sabbath Sacrifice". In a manner resembling postwar layers of the emergent Christian tradition, instead of entering God’s sacred and heavenly Presence through the weekly Sabbath, one could only experience the heavenly realities of the Sabbath and the sanctuary through faithfulness and obedience to Jesus, the faithful and obedient heavenly high priest who purifies, sanctifies, and perfects."
Posted by Brian Small at 4:12 PM