Heavenly Priesthood in the Apocalypse of Abraham

Andrei Orlov asked me to post information about his new book, Heavenly Priesthood in the Apocalypse of Abraham, which ponders connections with the theology of Hebrews. 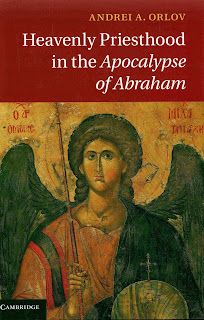 Description from the publisher: The Apocalypse of Abraham is a vital source for understanding both Jewish apocalypticism and mysticism. Written anonymously soon after the destruction of the Second Jerusalem Temple, the text envisions heaven as the true place of worship and depicts Abraham as an initiate of celestial priesthood. Andrei A. Orlov focuses on the central rite of the Abraham story - the scapegoat ritual that receives a striking eschatological reinterpretation in the text. He demonstrates that the development of the sacerdotal traditions in the Apocalypse of Abraham, along with a cluster of Jewish mystical motifs, represents an important transition from Jewish apocalypticism to the symbols of early Jewish mysticism. In this way, Orlov offers unique insight into the complex world of the Jewish sacerdotal debates in the early centuries of the Common Era. The book will be of interest to scholars of early Judaism and Christianity, Old Testament studies, and Jewish mysticism and magic.

Partial previews are available at Google Books and Amazon.
Posted by Brian Small at 11:26 PM