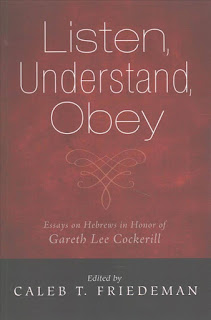 As the subtitle suggests, this collection of nine essays is in honor of Gary Cockerill, who was a missionary to Sierra Leone, and a long-time professor, now retired, of Wesley Biblical Seminary in Jackson, Mississippi. He has been a long-time contributor to scholarship on Hebrews. He did his doctoral dissertation on the Melchizedek Christology in Hebrews 7 for Union Theological Seminary in Virginia in 1976. He has contributed several articles on Hebrews that have appeared in various journals over the years. He has written a couple of popular-level books on Hebrews: A Guidebook for Pilgrims to the Heavenly City and a commentary for the Wesleyan Publishing House. But his magnum opus must be his Hebrews commentary in the distinguished New International Commentary series published by Eerdmans. I consider it to be one of the leading commentaries on Hebrews in existence today.

At the outset, I must give full disclosure that I consider Gary Cockerill to be a personal friend. My memory is getting a little fuzzy, but I must have first met him at the first SBL meeting I attended in Philadelphia in November 2005. But it was certainly at the Hebrews and Theology conference I attended at the University of St. Andrews in Scotland in the summer of 2006 when our friendship really began to develop. Ever since then, we have regularly had meals together at every SBL conference. The study of Hebrews is not just an academic exercise for Gary. I have seen how he has been deeply touched in a personal way by the profound message that Hebrews has to offer.

In the opening essay, Rick Boyd explores the use of Psalm 8 in Hebrews. He contends that Psalm 8 is given an eschatological orientation in Hebrews. He argues cogently for an anthropological reading of Psalm 8 in the context of Hebrews. God’s design is to subject the world to come to humanity, but this subjection is not yet realized (2:5–8). Verse 9 indicates a change in subject. Christ fulfills Psalm 8 as the representative human who attains to perfected Sonship (2:10; 7:28) and is crowned with glory and honor (2:9). As pioneer of their salvation, he then is able to lead humanity to God’s originally intended creational design for them.

In the second chapter, Scott Mackie critiques those scholars who try to make a distinction between προσέρχομαι (“draw near”) and εἰσέρχομαι (“enter”) in Hebrews. According to these scholars προσέρχομαι refers to the preliminary or proleptic access that the living have to God, while εἰσέρχομαι denotes full access that the deceased have to God. Mackie examines three passages (4:14–16; 10:19–23; 12:22–24) which use προσέρχομαι, and one passage (6:18–20) which uses εἰσέρχομαι. He contends that there is no distinction in Hebrews’ usage of these verbs. In all four passages the logic of Hebrews demands that believers imitate Jesus’ entry into the heavenly realm; their faithful perseverance is dependent upon their attainment of communicative and relational proximity to God and Jesus in the heavenly sanctuary.

Matt O’Reilly employs social identity theory to explore the temporal aspects of social identity in Hebrews 3:7–4:11. The author of Hebrews depicts God’s rest as a desirable potentially future social identity for his audience. The rest motif functions as a social boundary marker; only believers will be able to enter into the divine rest. The author attempts to show the coherence of their anticipated future social identity with their past. First he associates the promise of rest with God’s divine rest on the seventh day of creation. The creation story helps to define the identity of the people of God in terms of their relationship to God as creator. Second, he connects his audience to the wilderness generation. The author demonstrates that there is continuity between the wilderness generation and the audience in that both had the gospel (the promise of rest) preached to them, but at the same time he wants to encourage the audience not to imitate the unfaithfulness of the wilderness generation and so strengthen their identity as the people of God who enter into God’s rest. Entrance into God’s rest is presently available to God’s people; however, full realization of that rest awaits the future.

Jon Laansma engages in a theological reading of Hebrews regarding the living and active Word of God. In the first part of his essay, “the God Who Acts,” he investigates the narrative substructure in 2:5–8; 3:7–4:11; and 5:11–6:20. Laansma contends that the Abrahamic promise is the thread that weaves throughout the underlying storyline of Hebrews. The promise is to be construed as the sacred space of the heavenly rest and tabernacle into which God’s people can enter only by means of Christ’s priestly and sacrificial ministry. In part two, “the God Who Speaks,” Laansma explores Hebrews’ theology of the word. The God who spoke through the prophets in the Scriptures now speaks in the Son. With the advent of the Son, we now read the OT Scriptures with a Christological hermeneutic. While the OT was God’s word, it was incomplete because it was not God’s word in the Son. Laansma concludes the essay with a brief reading of the exordium (1:1–4).

Caleb Friedeman examines one point of convergence between the Synoptic tradition (in particular Mark) and Hebrews. Both traditions utilize Psalm 2:7 to emphasize that God’s ultimate revelation is in Jesus as the Son of God. Friedeman first traces this theme in the Gospel of Mark. Mark’s introduction at 1:1 and the centurion’s confession at 15:39 form an inclusio for the book, while Jesus’ baptism, transfiguration, and the Parable of the Tenants form key moments in the narrative. He then briefly surveys the usage of Psalm 2 in early Jewish literature (the Dead Sea Scrolls, selected pseudepigrapha, the Septuagint, Targums, and Rabbinic literature) and the New Testament. He concludes that the Synoptic tradition and Hebrews are unique in utilizing Psalm 2:7 to emphasize that Jesus as Son is God’s climactic revelation. Together the two traditions herald the Son as God’s ultimate revelation both in Jesus’ earthly life and in his current position at the right hand of God. Friedeman proposes that Hebrews is dependent upon the Synoptic tradition for this motif.

Amy Peeler examines the “filial foundations of ordination in Hebrews and other New Testament texts” (p. 95). Peeler has argued that Jesus derived his priesthood from his Sonship. As Son, Jesus received his call to the priesthood from his Father. His pedagogical training through suffering and his self-sacrifice perfects him for his role as high priest. In a similar way those who participate in Christ derive their priestly status from their sonship. She begins by tracing the theme of the priesthood of all believers in 1 Peter, Revelation, Paul, and Hebrews. She concludes that in all these texts it is the believer’s filial status that allows them to serve God as priests. Peeler then revisits the same four NT sources and finds that they also give justification for ordination. While all believers are called to be priests, some individuals are set aside for the specialized ministry of leadership.

Carey Vinzant traces a common underlying narrative in three NT authors: John, Paul, and Hebrews. All three exhibit a common Christological trajectory of preexistence, kenosis, and exaltation, but they present these themes in their own distinctive ways. John depicts Jesus as the divine Word made flesh who returns to the Father after his resurrection. Paul’s narrative arc is reflected in two high Christological passages: Philippians 2:5–11 and Colossians 1:15–20. In Hebrews Christ is co-creator, who became lower than the angels, taking on human flesh and experienced temptation, suffering, and death, but now is exalted to the right hand of God as the great High Priest. Likewise, all three develop their accounts of the human problem of sin and the salvation offered by Christ by means of their own distinctive metaphors. In John sin is described as darkness, blindness, and death. The solutions offered by Christ are light, signs leading to belief, and life. For Paul sin is depicted in terms of death, guilt, and debt. Christ provides life, pardon, and freedom. Finally, in Hebrews sin is construed in terms of uncleanness and separation from God. Christ effects cleansing which enables God’s people to enter into the presence of God.

Thomas McCall engages in an exercise in the theological interpretation of Scripture in conversation with Karl Barth and Thomas Aquinas on the topic of the submission/subordination of the Son. After making some initial observations on Hebrews 5:7–10, he gives an overview of Barth’s and Aquinas’ respective views on the obedience of the Son. For Barth, the eternal subordination of the Son is inherent in the life of the Trinity, that is, there exists in the very nature of God Himself a superiority (the Father) and subordination (the Son). By contrast Aquinas claims that the obedience and subordination only applies to the incarnate Son in his mission as redeemer of humanity. But the unity of the Son and the Father is so complete that the Son enjoys the beatific vision even in his earthly life. McCall first critiques Barth’s view, which he finds to be inconsistent with his stated view elsewhere that there is no distinction of personality in the Godhead, and his view runs into the danger of ontological subordination. Furthermore, Barth’s view runs afoul of Hebrews 5 in which Jesus learned obedience, although he was the Son. Jesus’ obedience and submission is not intrinsic to Jesus’ identity as the Son. By contrast Aquinas’ position avoids the problems of Barth’s theology and coheres well with Hebrews 5:7–10.

Chris Bounds undertakes “an exercise in Wesleyan ad fontes” (p. 155) in exploring early Methodist theologian’s appropriation of Hebrews in shaping Wesleyan doctrine. He engages in what amounts to be a descriptive overview of the explanatory notes and commentaries on Hebrews of the earliest Methodist theologians: Joseph Benson, Adam Clarke, Joseph Sutcliffe, and John Wesley. He organizes his descriptive task under the following headings: Jesus Christ, New Covenant Versus Old Covenant, Salvation and Atonement, Obedience Necessary for Final Salvation, Apostasy, and Christian Perfection. Bounds concludes that these commentaries “provide essential fontes from which to understand Methodist theology and evaluate Wesleyan doctrinal development” (p. 169) and that they highlight “the heart and strength of Wesleyan theology: soteriology” (p. 170).

End matter includes a bibliography of Gary Cockerill’s works, and an index of ancient sources.

The essays in this collection are a diverse and interesting assemblage of articles dealing with Hebrews. I personally would liked to have seen more essays included in this festschrift as a fitting tribute to a man who has spent so much of his career uncovering the rich treasures of the biblical book of Hebrews.

I want to thank Caleb Friedeman and Wipf and Stock Publishers for a review copy of this book.
Posted by Brian Small at 12:06 PM