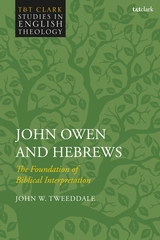 Book description from website:
"John Owen is frequently acknowledged as a leading figure of the Puritan and nonconformist movements of the 17th century. However, while his reputation as a pastor, statesman, educator, polemicist, and theologian are widely recognized, his efforts in biblical interpretation are often overlooked; including his massive commentary on Hebrews that represents the apex of his career and which exemplifies many of the exegetical methods of the post-Reformation. John W. Tweeddale reappraises Owen's work as a biblical exegete, offering the first analysis of his essays, or “exercitations,” on Hebrews.

Beginning with an evaluation of the state of research on Owen's commentary on Hebrews, as well as to suggest reasons for its neglect in current scholarship, Tweeddale then places Owens' work within the context of his life; considers the function of federal theology in Owen's essays and how his promise of-fulfillment hermeneutic fits within the broader scope of reformed discussions on the doctrine of covenant; Owen's attempts to resolve the challenge posed by a Christological reading of the Old Testament to a literal interpretation of Scripture; how his essays represent a refining of the exegetical tradition of the Abrahamic passages in Hebrews; and how his exegesis distinguishes himself from the majority of reformed opinion."
Posted by Brian Small at 5:07 PM