Another New Book on Hebrews on the Horizon

Another book on Hebrews has appeared on the horizon, this one by my Baylor colleague:

Jason A. Whitlark. Resisting Empire: Rethinking the Purpose of the Letter to "the Hebrews." T & T Clark International. Expected: August 28, 2014. 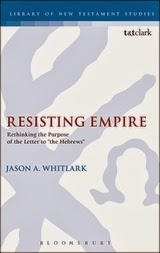 Description:
"This book offers a fresh reading about the purpose for which Hebrews was written. It argues that Hebrews engages both the negative pressures (persecution) and positive attractions (honor/prosperity) of its audience's Roman imperial context. Consequently, the audience of Hebrews appears to be in danger of defecting to the pagan imperial context and not the Jewish synagogues as proposed by much of scholarship on Hebrews. Due to the imperial nature of these pressures, Hebrews obliquely critiques the imperial script according to the rhetorical expectations in the first-century Mediterranean world - namely, through the use of figured speech. This critique is the primary focus of Whitlark's project. Whitlark moves to on suggest that Hebrews functions much like Revelation, that is, to resist the draw of the Christians' Roman imperial context, in part, by providing a covert opposition to Roman imperial discourse. He offers a possible explanation for why Hebrews circulated widely in the early Christian movement and makes some suggestions for dating Hebrews and the ethnic/socio-economic make-up of the authorial audience of Hebrews."