Review of Peeler, You Are My Son 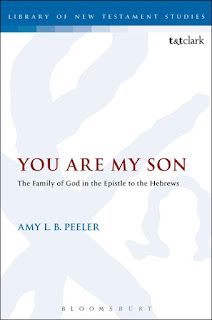 While many scholars have noted the familial language in the Book of Hebrews, Amy Peeler’s monograph is probably the first full-length study to explore this theme in Hebrews. In the brief introduction, Peeler highlights the familial language in Hebrews: God is portrayed as a Father; Jesus as God’s Son and heir; and believers as children of God, Jesus’ siblings, and heirs. Peeler contends that the familial relationship between God the Father and Jesus the Son is foundational for the theology of Hebrews. God calls Jesus to suffer and to be exalted to his right hand, where he becomes heir of all things. This process enables believers to become part of God’s household and participate in Jesus’ inheritance. Peeler approaches her argument in a straightforward manner. The four chapters that form the heart of the book deal with all of the pertinent passages in Hebrews in a sequential manner.

Chapter 1 examines the familial language in the first chapter of Hebrews. Verse 5 is the key verse which establishes the familial relationship between God the Father and Jesus the Son: God announces by means of two OT passages that Jesus is his Son and that he is his Father. Verse 5 thus becomes the basis for interpreting the story of God’s Son as narrated in verses 1–4. These verses describe the character of the Son and reflexively also define the character of the Father. In the remaining verses of the catena (verses 6–13), God articulates the privileges and responsibilities that Jesus inherits as the Son. One important insight that emerges from Peeler’s investigation is that Jesus’ preexistence is a personal one: God has a relationship with a person distinct from himself, not an aspect or function of God’s self. Peeler also argues that the name that Jesus inherits from his Father is “Lord God” (κύριος θεός), in contrast to the majority of interpreters who propose that the name is “Son.” “Son” is a title that is unique to Jesus and thus cannot be descriptive of the Father.

In chapter 2 Peeler engages in a close exegetical analysis of Heb 2:6–16. Jesus the Son must become human and experience suffering and death in order to be perfected as God’s heir. As heir Jesus inherits God’s many sons and daughters as his possession and he leads them as the ἀρχηγός into their own inheritance. Jesus displays his character as the Son by trusting God to the point of becoming human and experiencing suffering and death. God reveals his character as Father by using suffering as a means of perfecting his children.

In chapter 3 Peeler turns to the central cultic section of Hebrews (chapters 3–10). She first demonstrates the intimate relationship between Jesus’ Sonship and his high priesthood. First, it is God, in his role as Father, who appoints Jesus to the priesthood. His appointment includes the necessity of becoming human. Hence, Peeler makes the interesting observation that τῷ ποιήσαντι in 3:2 refers both to his appointment as high priest and his being made human. Second, it is precisely the fact that Jesus is God’s Son that disqualifies him for the Levitical priesthood but qualifies him for the priesthood of Melchizedek. Third, Jesus is perfected for the vocation of high priesthood because he is obedient to the Father in carrying out his filial role in experiencing the human condition of suffering and death, and because he receives the inherited blessing of exaltation from the Father. Fourth, it is Jesus’ priestly actions that secure the possession of his own inheritance, God’s many sons and daughters. Jesus’ priestly offering removes sin, achieves cleansing, and obtains redemption for God’s children. Jesus’ death enables them to obtain their inheritance of eternal salvation, and he aids his siblings in their attainment of salvation through his priestly intercession.

Chapter 4 focuses on the final two chapters of Hebrews and highlights the shared status that Jesus and the audience have in their relationship to God. The audience’s relationship to God as children correlates to Jesus’ relationship to God as Son. The author assures the audience that they are children of God by appealing to Prov 3:11–12.  God disciplines the audience like a father disciplines his son. Peeler contends that the author is emphasizing the educative rather than the punitive aspects of God’s παιδεία. Just as God the Father used suffering in order to perfect Jesus the Son, in the same way God is using suffering to perfect the audience in righteousness and holiness. The author employs four positive injunctions to urge the audience to endure suffering and he warns them with the negative example of Esau, who lost his inheritance when he gave away his birthright. The author assures his audience that they now stand at the foot of the mountain where God’s children dwell, and that they are privileged to hear God speaking to them as a Father; hence they should respond appropriately as obedient children. The concluding chapter summarizes the argument of the book and proposes seven ways in which the book makes contributions to scholarship on Hebrews.

Peeler articulates her thesis well and clearly lays out her argument throughout the book. By viewing Hebrews through the lens of familial language, Peeler brings into focus interesting new insights into Hebrews. She convincingly demonstrates the importance of the familial motif in the argument of Hebrews. Her analysis does raise a couple of questions for me. First, is it appropriate to say that Jesus inherits his own family members? Inheritance normally refers to the possession of land or property, and not to the possession of one’s own family members. As “big brother” Jesus is the guardian who is entrusted with the care of his siblings until they enter into their own inheritance, but do they become part of Jesus’ inheritance? Second, while Hebrews does emphasize the educative aspects of God’s παιδεία, does it exclude the punitive aspects? The quotation from Prov 3:11–12 uses the language of reproof and flogging. Both terms suggest that correction or punishment was included in the author’s concept of παιδεία. The author does occasionally chastise his audience, and the audience, while certainly sharing many things with Jesus, does not share his sinlessness. Could not God’s παιδεία of his children include both educative and corrective aspects? These two questions aside, readers will find that this monograph makes important contributions to the understanding of Hebrews.
Posted by Brian Small at 2:21 PM