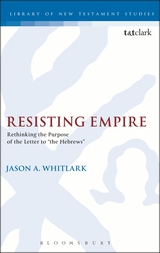 A recent trend in NT studies is the attempt to situate the NT writings within the Roman imperial context. While a few smaller studies have tried to position Hebrews as an anti-imperial document, Jason Whitlark’s monograph represents the first full-length treatment of this theme. He attempts to show that “the Letter to ‘the Hebrews’ challenges the claims of imperial Rome in order to resist the pressure and temptation its audience felt to compromise its confession of Jesus Christ” (p. 3). In chapter 1 he identifies his operating assumptions regarding the social location and identity of the recipients as follows: the audience is a Gentile Christian community residing in Rome during the Flavian period (particularly around the reign of Titus in AD 79–82). Whitlark employs an authorial audience approach: the audience would have had certain expectations about the rhetorical strategies regarding critiques of power and would have had contextual knowledge about Roman imperial power.

Chapter 2 argues that rhetoricians often employed figured speech or covert allusion for reasons of propriety or caution. Whitlark identifies three types of figured speech: implication (ἔμφασις), deflection (πλάγιον), and irony (ἐναντία). Readers may detect figured speech either by clues in the literary text itself or by an awareness of the historical context. Figured speech was used in the Roman imperial context because slander of the empire or emperor was deemed treasonous, the presence of informants was pervasive, and imperial audiences expected that figured speech would be used by skilled orators.

In chapters 3 and 4 Whitlark argues that Hebrews urges its audience to resist assimilation to their Roman imperial context. Negatively, Hebrews engages in a veiled polemic against idolatry. Whitlark finds three indicators of this veiled polemic: (1) key terminology: the description of God as “living” and the reference to “dead works”; (2) five warning passages quote OT passages whose larger context warns against idolatry; and (3) the examples of Moses and Esau serve as warnings against the lure of wealth and honor and the danger of sexual immorality respectively. Positively, Hebrews offers a better hope than that associated with Roman imperial power. Hebrews co‑opts Roman imperial terminology claiming that the Christian hope offers a better οἰκουμένη (inhabited world) and a better πατρίς (fatherland). Furthermore, God offers the community rest (κατάπαυσις) from their labors in their perseverance in the face of the oppressive power of Rome.

In chapters 5 through 8 Whitlark addresses four ways in which Hebrews resists the claims of imperial Rome. First, Hebrews implicitly declares that the emperor is powerless to safeguard the permanence of the imperial city and its empire. Only the Christian community can lay claim to a king who guarantees access to an eternal city, the heavenly Jerusalem. Second, in 2:14–15 Hebrews correlates the devil with the Roman imperium, its power over life and death. Jesus, however, has defeated the devil and has liberated Christians from the fear of death. Hence, Rome is unable to force ultimate allegiance to its rule. Third, Hebrews draws from the image of Hercules in depicting Jesus as the liberator from death. The figure of Hercules was often appropriated by the Roman emperors for their own claims. Hebrews undermines the claims of the Roman emperors and exposes them as imposters by depicting Jesus as the only one who can fulfill the hopes represented by Hercules. Fourth, Hebrews employs a syncrisis of the old and new covenants in order to counter the theodical challenge of the Flavian triumph to God’s sovereignty and honor. Chapter 8 offers an ingenious solution to the problem of why Hebrews never mentions the temple. The tabernacle (and, by implication, the temple) was never meant to be a permanent memorial to God’s glory. Rather, it pointed beyond itself to a greater purpose, which found its fulfillment in God’s enthroned Son. Hence, God’s purposes were not thwarted when the Romans destroyed the temple. Hebrews is thus able “to counter the claims of Flavian triumph without having to address them directly” (p. 184).

In the final chapter Whitlark summarizes his argument and draws out the implications of his study for relapse theories, for the place of Hebrews in the NT canon, for the relationship of Hebrews to early Christian martyrdom, and for the issue of domination and resistance that informs imperial-critical studies of the NT.

There is much to commend about this study. Whitlark writes well and he develops his argument in an effective manner. His study is a helpful reminder that the audience of Hebrews lived within a Roman imperial context and he draws upon a wealth of research about ancient Rome to support his claims. Naturally, there will be some who may not be entirely persuaded by his argument. It is a tricky venture to argue that an author employs figured speech because one has to expose secondary or hidden meanings behind the plain meaning of a text. For example, is the reference to the devil really an oblique allusion to the Roman Empire, or is it really just a reference to the devil? Does the figure of Hercules really lie behind the author’s depiction of Jesus? Is the promised rest really meant to imply deliverance from oppressive Roman power? A plain reading of Hebrews reveals very little that could be construed as an overt or direct challenge to imperial claims. One can make perfectly good sense of Hebrews without positing that it is an anti-imperial polemic. If Hebrews is indeed engaged in a figured critique of Rome, its rhetoric is so subtle that its purpose has been lost most interpreters of the book. Yet, while individual components of Whitlark’s argument may not be entirely persuasive by themselves, together they have a cumulative force that leads to a very plausible reading of the book. Whitlark has written an important monograph that will certainly need to be taken into consideration by any future studies on Hebrews.

[Full disclosure: Jason and I both received our doctorates at Baylor University, and he was a colleague of mine at Baylor. Nevertheless, I was skeptical of his thesis when I first became aware of it. However, this is a very impressive book; it is well researched and well argued. He has moved me at least to the status of "okay, it is possible." I would still like to see evidence that other early Christian writers—who lived within the boundaries of the Roman Empire—read Hebrews as an anti-imperial polemic.]
Posted by Brian Small at 2:13 PM