Hebrews: Writing at the Borders 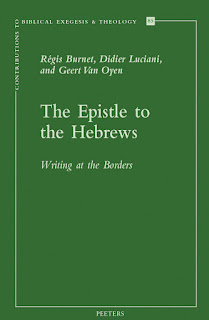 At the recent meeting of the SBL, I saw an advance copy of this book which is scheduled to come out very soon:

The Epistle to the Hebrews: Writing at the Borders. Edited by R. Burnet, D. Luciani, and G. Van Oyen. Contributions to Biblical Exegesis and Theology 85. Leuven: Peeters, 2016.

"This volume contains the exegetical contributions of a conference held in Louvain-la-Neuve in 2014. The participants explored the concepts of border, boundary, and frontier related to Hebrews, not only in the letter itself, but also in its reception. The book first focuses on the definition of Hebrews as a text at the confluence of various cultural worlds: elaborated in the Diaspora, can the letter/sermon be characterized as a middle course between a so-called 'Jewish world' and a so-called 'pagan world'? Within the Jewish cultural world, did it really hold a marginal position? Is its nuanced attitude toward the priesthood and the Temple the first step outside Judaism, as it has long been claimed?"
Posted by Brian Small at 1:29 PM