I am pretty psyched about getting this new French commentary on Hebrews in the mail: 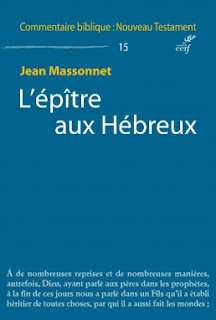 Jean Massonnet, a priest of the diocese of Lyon, is a graduate of the Pontifical Biblical Institute and professor emeritus of the Faculty of Theology of the Catholic University of Lyon where he was director of the Christian Center for the Study of Judaism from 1990 to 2005.

This is a pretty substantial commentary. The layout of the commentary is as follows. After the forward and abbreviation page, there is a general bibliography consisting of commentaries, studies on Hebrews, and other studies. The thirty-page introduction covers authorship and canonicity, recipients, date of the writing, literary genre, structure and movement, the milieu of Hebrews, the message of Hebrews, and the text.

In the commentary proper, each pericope begins with a translation followed by text-critical and translation notes and a brief bibliography. The interpretation proceeds on a verse-by-verse basis. Additional notes and occasional excurses round out each section. End matter includes indices on modern authors, primary sources, and topics; a list of excurses; and a table of contents (typically at the back of the book as is standard practice in French books). My only qualm with the book so far is that Greek is transliterated in the interpretation (but Greek is used in the more technical notes).