Review of Healy's Commentary on Hebrews 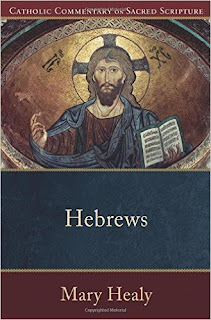 Mary Healy, professor of Sacred Scripture at Sacred Heart Major Seminary, has produced one of the most recent commentaries on Hebrews. This one belongs to the Catholic Commentary on Sacred Scripture. According to the series editors, the series “aims to serve the ministry of the Word of God in the life and mission of the Church” (9). The series intends to provide an accessible commentary on each book of the NT for the benefit of pastors and other interested persons. The series will “focus on the meaning of the text for faith and life rather than on the technical questions that occupy scholars” (10). The commentary uses ordinary language that does not require expertise on the part of the reader. The series is naturally from the Catholic perspective, but it will draw on the scholarship from other traditions.

In the modest introduction, Healy deals briefly with some of the critical issues of Hebrews. She says that Paul was likely not the author and sets out the usual reasons for rejecting Pauline authorship. She then briefly considers other candidates but concludes that the author is simply unknown. She believes that the recipients were likely Jewish Christians, not Gentiles, who were in danger of falling away from their faith. Jerusalem was a possible destination for the book, but it was more likely sent to Rome. She prefers the date of composition to be sometime in the early to mid-60s CE. She notes some of its literary form and features, including Hebrews oral character, its alternation between doctrine and moral exhortation, its rich vocabulary and use of various literary devices. She considers Hebrews to be an example of an early Christian homily. She notes that the structure of the book revolves around seven “primary reflections on biblical passages” (24).

Healy highlights six theological themes in Hebrews, which she designates as follows: (1) Jesus our high priest, (2) solidarity with sinners, (3) the power of Christ’s death, (4) old and new, (5) the pilgrim church, and (6) drawing near to God. She concludes the introduction with a reflection on “Hebrews for today.” The introduction is followed by a straightforward outline of Hebrews.

In the commentary proper, each chapter begins with an overview of the passage under consideration. Each chapter usually includes several subsections which deal with the text in smaller portions. Each subsection begins with a translation from the New American Bible followed by cross-references to the OT, NT, the Catholic catechism, and the lectionary. The exposition of the text proceeds with a verse-by-verse analysis. The English translation being commented upon appears in bold print within the exposition. References to the Greek text scarcely appear and the Greek is in transliteration when it does appear. Two types of “sidebars” are sprinkled throughout the commentary. First, are Biblical Background sidebars that deal with historical, literary, or theological issues. Second, are Living Tradition sidebars that “offer pertinent material from the postbiblical Christian tradition, including quotations from Church documents and from the writings of saints and Church Fathers” (10). Many of the chapters or subsections conclude with a “reflection and application.” A glossary is included at the end of the book for more specialized terms.

At 2:10, where it states that Jesus was “perfected” through suffering, Healy notes that the Greek word teleioo means to “ordain” a priest. However, the LXX almost always uses teleioo with tas cheiras, “the hands,” when referring to ordination. Ordination is probably not its primary meaning in Hebrews. Rather, it likely refers to Jesus’ vocational perfection. Jesus was perfected for his role as high priest.

At chapter 4, Healy opines that the “rest” that the author of Hebrews speaks about is both a future and present reality. On the one hand, “Hebrews is probably referring to the future heavenly kingdom, when we will finally be free from all the toils, trials, and troubles of this life” (89). On the other hand, “God’s rest is a present reality that we are invited to enter” today (90).

In her discussion of the warning passage of chapter 6, Healy rightly rejects eternal security: “Some Christians have embraced the misguided doctrine of ‘eternal security,’ which is sometimes expressed as ‘once saved, always saved.’ However, this view is inconsistent with many New Testament texts that warn Christians of the possibility of forfeiting our eternal salvation” (129).

At 7:3, Healy remarks that the author does not view Melchizedek as some sort of supernatural beings. Rather, the author makes his argument about Melchizedek based on the gaps in the Genesis account regarding his parentage and genealogy.

In her reflection on 9:1–10, Healy avers that, symbolically, the floor plan of the tabernacle signified three things. The outer and inner spaces signified respectively: (1) the former age and the new age; the new covenant versus the old; (2) the exterior and the interior of the person; outward ritual purity versus inward purity of the conscience; and (3) earth and heaven. She makes the interesting correlation that they correspond to the threefold spiritual sense of Scripture, according to Christian tradition: allegorical, moral, and anagogical. She also notes that the objects of the tabernacle mentioned by Hebrews typologically foreshadow Christ.

At 9:11 Healy claims that “the greater and more perfect tabernacle” refers to Christ’s own risen body. This explanation fails to explain how Christ can “pass through” his own exalted body. At 9:14 Healy argues, following Vanhoye, that the phrase “through eternal spirit” likely alludes to the fire on the altar of sacrifice, which the priests were never to let extinguish. The fire transformed the sacrifices into smoke and made them acceptable to God. She remarks, “Hebrew suggests, then, that the ‘perpetual fire’ foreshadowed the eternal divine fire that engulfs Jesus’ sacrifice: the Holy Spirit” (176).

At 9:23 Healy argues that the heavenly things that need cleansing are “the law written on the heart, the redeemed people of God, the true tent that is Christ’s glorified humanity, and the new covenant liturgy” (185–86).

At 10:20, which seems to equate the veil with the flesh of Christ, Healy suggests that “as God was present but hidden behind the veil of the tabernacle, so in Christ God is present but veiled by his human nature” (211). She also indicates that the reference to Jesus’ flesh and blood in 10:19–20 is an allusion to the Eucharist. She believes this passage is an invitation to the readers to join the Christian community in worship, “which takes place supremely in the Eucharistic liturgy” (211). Healy finds additional allusions to the Eucharist in 6:4 (“tasted of the heavenly gift”) and 13:10 (“We have an altar from which those who serve the tabernacle have no right to eat”).

In the reflection and application section on 11:30–40, Healy has a particularly compelling tribute to contemporary Christian heroes who exemplified living by faith.

This is a solid mid-range commentary. It evinces interaction with the scholarly literature while not being overly technical. The commentary does not give a detailed explication of the Greek text will, but rather provides a good overview of the flow of thought of Hebrews. The closest technical equivalent to this series would be the Tyndale New Testament Commentaries, but it differs from this series with its inclusion of sidebars.

Clearly the commentary is geared towards Catholic readers. Occasionally Healy refers to the Catechism or she quotes one of the popes, or she makes mention of well-known Catholic figures of the past. Nevertheless, these references are occasional and Christians of other traditions can benefit from her commentary.

Healy usually makes sound exegetical decisions, but naturally one will not agree with everything. For example, I do not think there are any allusions to the Eucharist in Hebrews. As noted, I also believe that Jesus’ perfection does not refer to his ordination as high priest but to his vocational perfection in his role as high priest.
Posted by Brian Small at 1:29 AM