Review of Vanhoye's Commentary on Hebrews 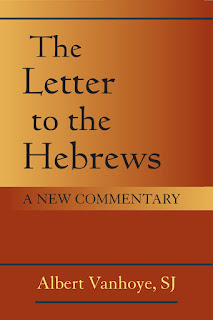 Albert Vanhoye is one of the most prolific writers on the Book of Hebrews. In my compiled bibliographies on Hebrews, I count 42 works by Vanhoye, including commentaries, monographs, and articles. His writings appear in several languages, including English, French, German, Italian, Spanish, and even Latin. The work currently under review is the second commentary by Vanhoye that has appeared in recent years. I reviewed the other commentary, A Different Priest, over five years ago. Since I reviewed that commentary at length elsewhere, this review will be much shorter.

This is a mid-range commentary. While the commentary evinces scholarly research, it is written at a popular level. The commentary does not delve into the Greek text. Footnotes are not used and a very modest bibliography, along with a Scripture index, appears at the end of the book.

Vanhoye deals with some critical issues in the modest introduction (pages 1–20). He first considers genre. He believes that Hebrews is a sermon that was delivered to several different churches. This letter is then one instantiation of the sermon which became fixated in writing. This is an intriguing thesis which is certainly worthy of consideration. I find one problem with it: some of the passages in Hebrews seem to be dealing with the specific situation of a particular congregation (5:11; 6:10; 10:32–34), rather than to a broader audience.

In terms of doctrinal content, Vanhoye considers Hebrews to be a treatise on Christology. In particular, it depicts Jesus as a priest, a feature that is unique in the NT. He believes that the oracle in Psalm 110 prompted the author to consider Jesus’ status as a priest.

In his discussion of authorship, Vanhoye notes that Hebrews evinces some non-Pauline features, including a different literary style, different quotation practice, and a focus on Jesus’ priesthood. Nevertheless, Hebrews also shares some elements with Pauline theology. Vanhoye argues that the “dispatch note” at the end of the homily (13:19, 22–25) is by a different author than the rest of the work. He believes that the dispatch note evinces Pauline characteristics and hence concludes that Paul was giving his approval of a homily by a close colleague, who was most likely Barnabas.

Regarding other features of the composition of the homily, Vanhoye claims that the recipients were Christians, but he does not decide whether they were Jewish or Hellenistic. The “strength of the tradition” that the letter was readily accepted in the East persuades him that the homily was most likely written in Rome. He sets the date at around 66 or 67 CE, that is, before Paul’s martyrdom.

Vanhoye is most known for his work on the structure of Hebrews. In the introduction he gives a brief analysis, dividing the homily into five major parts:
Exordium (1:1–4)
Part 1 (1:5–2:18)
Part 2 (3:1–5:10)
Part 3 (5:11–10:39)
Part 4 (11:1–12:13)
Part 5 (12:14–13:19)
Conclusion and doxology (13:20–25)
A briefer outline follows, which subdivides each of the five major parts. The introduction is followed by a long section (pages 21–50) entitled “Text of the Letter Annotated.” This section consists of a translation (which is not identified and appears to be the author’s own) with cross-references. The verses are arranged in order to highlight the literary structure of the homily. The commentary proper is divided into sections. Each section or subsection is headed by the structured translation followed by an exposition.

Aside from Vanhoye’s view of the composition of Hebrews, there is little that stands out for me from this commentary. Perhaps I have read too many commentaries on Hebrews. This commentary will give a good overview of the flow of thought of Hebrews, but persons seeking a more in-depth treatment of the Greek text will need to look elsewhere.
Posted by Brian Small at 2:09 AM