Review of McWilliams' Commentary on Hebrews 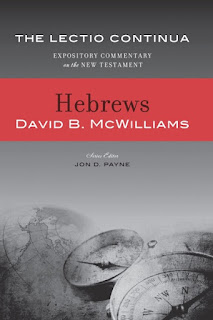 The Lectio Continua Expository Commentary on the New Testament is a new expository commentary series that seeks to fulfill what series editor Jon Payne says is the greatest need of the church: “the recovery of sound biblical preaching that faithfully explains and applies the text, courageously confronts sin, and boldly trumpets forth the sovereign majesty, law, and promises of God” (xv). The contributors of this series are pastor-scholars in the Reformed tradition from both sides of the Atlantic. The format of the series is to provide a systematic verse-by-verse expository proclamation of the biblical text. Its purpose is to provide a contemporary model of expository preaching. The series is not intended to be academic or highly technical. References to other works are minimal. There is no bibliography; all references to other works are located in the footnotes.

In the brief introduction, McWilliams lays out some reasons why we should study Hebrews today. He notes that the author is unknown and that it was written to Jewish Christians who were tempted to return to Judaism. In giving an overview of the flow of the book, he highlights some of the main themes of Hebrews: (1) the priestly work of Christ is inseparable from his person; (2) the finished work of Christ is foundational to his heavenly ministry; (3) the sympathy of our high priest finds a specific point of contact with the tempted and tried people of God; and (4) the intercession of our high priest is the great theme of Hebrews (xxxiii–xxxv).

The commentary proper is divided into 24 expository sermons dealing with the text of Hebrews of varying length. Each chapter is headed by a translation from the ESV text. The commentary rarely deals with the Greek text, and when it does, the Greek is transliterated. The English translation being commented upon appears in italics throughout the exposition.

In what follows we will look at some of the characteristic features and interpretive decisions in the exposition. At 1:5 McWilliams states that while the quotation of Ps 2:7 refers to the resurrection/exaltation of the Son, it could also equally be a reference to the eternal generation of the Son. At 1:6 he believes that “firstborn” refers to Jesus’ incarnation. Many commentators have taken it this way, but I have found that increasingly scholars believe that it is a reference to Jesus’ exaltation. In fact, the whole of the catena in chapter 1 is likely an allusion to the exaltation of the Son.

At the beginning of his discussion of 2:1–4, McWilliams asserts that Hebrews “is thoroughly committed to the final perseverance of the saints; a true believer cannot be lost” (40). This is a claim that he needs to demonstrate rather than assert. He claims that God “uses warnings to preserve his people” and that “false professors” must be warned (40). Yet, it makes no sense, if one claims that God predestines some to salvation and some to damnation, to also claim that God uses warnings to save the elect and to condemn the damned. Since, both the elect and the unelect cannot really change their destinies, the use of warnings is simply unnecessary. McWilliams later claims that the “Scriptures clearly teach that when a professing Christian walks away from his profession that [sic] he was never a true believer to begin with” (46). This is certainly an unfalsifiable claim. If a person shows all the signs of being a Christian, one would assume that the person is a Christian, but if that person then abandons the faith, is it a logical necessity to assume that person never really was a Christian? It is like the Calvinist wants his cake and to eat it too. However, if the Calvinist claim is correct, then ironically there can be no real assurance of salvation, since one can never really know whether one is elect or just one of the “false professors.”

Towards the end of this sermon, McWilliams engages in a bit of polemics by claiming that “Today, once again evangelical churches are drifting into Arminianism and the ‘openness of God’ heresy” (53). It is clear that he considers Arminianism to be an aberration and departure from true Christianity. He also sets his guns on emergent Christians and the New Perspective on Paul. I certainly believe that Calvinists are true Christians even if I don’t agree with their theology, so it is very sad to see that some Calvinists are so uncharitable towards other Christians with whom they disagree.

At 2:9, where Hebrews says that Christ “tasted death for everyone,” McWilliams denies that this refers to universal atonement (62). He takes the common Calvinist tactic of denying the plain meaning of the word everyone, and instead interpreting it in a limited sense.

In his discussion of the highly contested passage 6:4–6, McWilliams naturally rejects the Arminian interpretation that the truly regenerate can become lost. Rather, he takes the Calvinist position that the warnings of Hebrews 6 address only professing believers who really do not possess what they profess. He exclaims that the “writer speaks of those who have been in the sphere of the church, but who have never been regenerated, converted, or justified. In order to hold to this position, naturally he has to downplay the description of the one who falls away in verses 4–5 to be that of professing Christians and not genuine Christians, although there is nothing in the descriptions to suggest this interpretation. The author of Hebrews describes genuine Christians who have fallen away. The irony of McWilliams’ position is that Christians can have no real assurance of salvation since they may be professing something that they in fact they do not possess. Only time can tell if professors are true possessors.

In his discussion of “through eternal spirit” at 9:14, McWilliams presents some strong arguments in favor of the view that this phrase refers to Christ’s divine nature. Nevertheless, he believes that it refers to the enablement of the Holy Spirit in accomplishing redemption. First, it is the most natural reading of the phrase. Second, other NT passages refer to the empowerment of the Holy Spirit in the life and ministry of Jesus. Third, the text seems to have the suffering servant passages in mind. At 9:16–17 McWilliams prefers to understand diatheke to refer to “covenant” rather than “testament.” He notes that even in ancient covenant making a death was normally required.

At 10:36 the author of Hebrews urges the need for endurance in his readers. McWilliams engages in a bit of polemics again here. He remarks, “Arminianism has never been able to understand, based as it is upon a faulty view of God and man, that these exhortation do not imply that true believers may fail to arrive at the promised destination. Calvinism understands that these exhortations are essential to Christian living. God’s promise does not make exhortation unnecessary” (297). In essence, McWilliams claims, again, that God uses exhortation to insure that the elect will arrive at their appointed end. Again, I respond, commanding the elect to persevere is superfluous if God has already predetermined their eternal salvation.

In his discussion of the definition of faith in 11:1, McWilliams adopts the view of Moulton and Milligan that hypostasis refers to the “title-deed” of things hoped for. The title-deed guarantees the obtaining of the object of faith. Hebrews 11:3 mentions that by faith we understand that God created the universe by his word. McWilliams takes some space at this point in the exposition to denounce evolution (308–309).

Let us be clear what this commentary is. It is presented as a series of expository sermons on Hebrews. However, these are meaty theological treatises. This might be a series that one preaches to a seminary-trained audience rather than to your typical Sunday morning congregation. You will not find here homely illustrations such as you would find, for example, in R. Kent Hughes’ two-volume collection of sermons on Hebrews. Instead, sermon “illustrations” largely consist of quotations—some quite lengthy—of Calvinist theologians or hymn-writers.

I am reluctant to recommend this commentary for two reasons. First, rather than interpreting Hebrews on its own terms, McWilliams takes pains to make the author of Hebrews sound like a Calvinist. I am afraid that his theology has controlled his exegesis. The Calvinist who wants to reinforce his bias will surely want to snatch up a copy of this book. Second, on occasion McWilliams is uncharitable towards those with whom he disagrees. I have noted some of his polemics above. He does not engage in polemics in most of his expositions, but the few places where he does employ them makes the commentary unpalatable to me.
Posted by Brian Small at 8:26 PM